Read more »
Posted by marciano guerrero at 1:35 PM No comments: 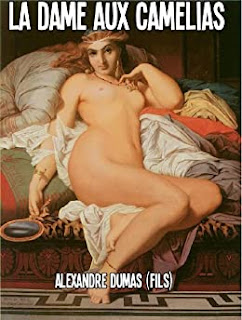 https://tinyurl.com/ybhqr8x7
This is such a good book. I love it and would read it again and again. It is about the most famous French courtesan of the 1800's falling in love with a man who cannot afford her and the relationship between the two. He gets jealous, she has to work, she feels guilty for ruining him and makes him leave her. She dies of tuberculosis, the most romantic disease of the time. It's a beautiful romantic story. Definitely recommend.
A best seller for all seasons. Get your copy!
Posted by marciano guerrero at 3:13 PM 2 comments:

Jane Austen's Quiet Grandeur --why is this so? 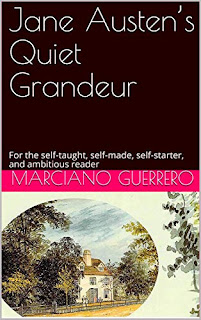 Available in amazon
Jane Austen’s fiction is replete with great humor, with delicate satire, with good sense, with kindness—and truth. There is nothing confusing or obscure, and nothing offensive, or indecent. In this sense, she was traditional because she learned from her predecessors: Oliver Goldsmith, Samuel Richardson, Frances Burney, and Maria Edgeworth. And although she had read the gothic novels of Mrs. Radcliffe, and the romantic writers, she kept apart from them. In the 18th-century art historian, Johann Winkelman said that what made Greek art sublime was “noble simplicity and quiet grandeur.” Without a doubt, what makes Jane Austen’s writing is that noble simplicity and quiet grandeur.
Posted by marciano guerrero at 1:06 PM 1 comment:

Confessions of Zeno, by Italo Svevo 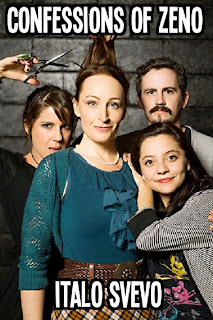 Italo Svevo, (1861-1928) Italian novelist and short-story writer, a pioneer of the psychological novel in Italy. He was born Ettore Schmitz, in Trieste, but he adopted the pseudonym, Italo Svevo, or Italus the Swabian, to acknowledge his mixed heritage: Italian by language (Trieste dialeto), Austrian by citizenship (Trieste was a city of the Austro-Hungarian Empire), and German (in fact, German-Jewish) by ancestry.

He attended a commercial school in Trieste, but his father’s business difficulties forced him to leave school and become a bank clerk. He continued to read on his own and began to write.


About the Confessions of Zeno

In 1907 novelist James Joyce was engaged as Svevo’s English tutor in Trieste, and in the process they developed a friendship. When Joyce read Svevo’s novel La coscienza di Zeno (Confessions of Zeno), he was so impressed with it that he encouraged the writer to publish it, and later helped to promote it.

While Joyce became enthralled with the latest novelistic techniques —particularly the stream of consciousness and indirect free style— to get inside the mind of his characters, Svevo accomplished the same thing without the new tools. Zeno’s consciousness is not the flowing of a stream, but the cascading, torrential avalanche of details that is the essence of humanness in all aspects: from low double entry bookkeeping, business, and economics, to manipulations of the Stock Market, to moral dilemmas, and raw passions.

Italo Svevo’s Confessions of Zeno belongs to the comic tradition of Don Quixote and Tristram Shandy, though not in the realist manner, but rather in a psychological vein. After a reading a few pages the reader will have no doubt that he is confronting a paradoxical juxtaposition between things of the mind and things themselves.

Zeno —the narrator and eponymous hero— on the surface is a hypochondriac, neurotic, quirky, solipsistic, self-examining and self-serving bourgeois; deep down, however, he is love and goodness incarnate, not by design but by the whims of life.

Although Svevo wrote many other works, his opus magnum will remain his Confessions of Zeno. While Proust and others wrote lengthy psychological novels, by their sheer length and density, they become soporific. Not so with Zeno, which is intriguing, suspenseful, engaging—never boring, a real tour de force.
Posted by marciano guerrero at 9:33 AM No comments:

The Revolt of the Masses by Ortega y Gasset 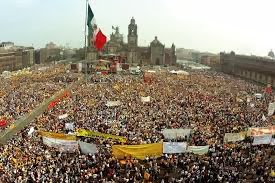 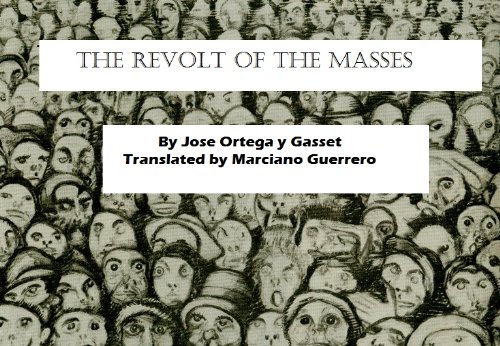 The Revolt of the Masses

https://tinyurl.com/ycxkpuy8
From Plato to Rousseau, to John Locke, and to our contemporary Francis Fukuyama, political theorists have always attempted to look back to find the agents of change of civilization. In the digital magazine The Daily Beast we read: “The same ideas I dismissed as old-fashioned and out-of-date back in the 20th century now reveal an uncanny ability to explain the most peculiar happenings of the digital age. Are you, like me, puzzled to learn that Popular Science magazine recently shut down comments on its website, declaring that they were bad for science? Are you amazed, like me, that Duck Dynasty is the most-watched nonfiction cable show in TV history? Are you dismayed, like me, that crappy Hollywood films about comic book heroes and defunct TV shows have taken over every movie theater? Are you depressed, like me, that symphony orchestras are declaring bankruptcy, but Justin Bieber earned $58 million last year? Indeed, Ortega’s book should be called the “answers book.”
Posted by marciano guerrero at 1:46 PM 1 comment:

Manon Lescaut and I -- Teen Romances 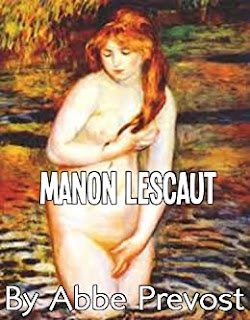 The novel by Abbe Prevost Manon Lescaut is a love story of an upper-class young man, Chevalier Des Grieux, who falls in love with a lower-class young woman, Manon Lescaut.
This humorous —and yet morally serious— story reminds me of my own infatuation when I was a teenager in Lima, Peru.
The Chevalier Des Grieux and Manon elope, not to get married, but simply to live together and enjoy each other. Green, inexperienced, naïve, the young man cannot foresee the financial difficulties of keeping up with a high-maintenance young lady. As a result, he ends up compromising his own values when he allows Manon to take in a lover and keep both of them living high on the hog.
In my case, when I was fifteen years old I met a mature woman—I never learned her exact age, but I guessed she was in her late forties— a popular singer, with many records to her name, night club appearances galore, and live radio broadcasts that kept her busy the whole year round. Of course, back then, I had no idea about the meaning of the word ‘infatuation.’ To me, to my young untried mind, the experience was nothing but sublime love!
Manon repeats her infidelities three times, with each adventure sinking the lover deeper into graver financial and moral circumstances. The good advice of family and friends, to abandon such a disastrous life, falls into deaf ears. The young Cavalier will never abandon Manon. In his blind love, he even follows her to Louisiana, America, where she ultimately finds her demise.
Reading Manon Lescaut as a mature man, reminded me of my own juvenile adventure. Whatever my family and friends said against my beloved queen and mistress of Peruvian music —that she was old enough to be my mother; that she was a ‘puta,’ etc., — only increased my desire to remain with her.
Manon Lescaut ends tragically, though with the hope that Des Grieux’s decision will lead him to the moral road again.
My teen romance ended only when my parents —to great expense defrayed by the sale of some of their lands— persuaded me to come to New York City to attend college, at Columbia University.
If you haven't read this book--you must! If will not disappoint you.
Posted by marciano guerrero at 12:20 PM No comments: