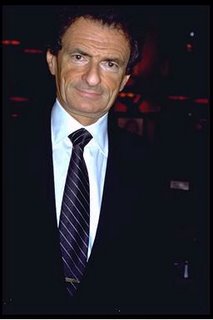 Polish Jewish writer Jerzy Kosinski was anathema for Poland's old communist rulers. His fault was to have shown in his famous novel Painted Bird that not all Poles were keen to help Jews during the Holocaust. As you will read below, his life story is a matter of controversy itself. Little JerzyLewinkopf was born in 1933 in Poland--the year Hitler came to power--to a Jewish family.

As father Moses Lewinkopf felt the threat waiting for them, he changed their surname into a more Polish-like one, Kosinski. At this point, we have two different stories in hand. The first, and the widely known one is goes on like this: They sent Jerzy away to one of their closest friends in order to escape the war. Then, he lived almost the same story we know from the Painted Bird. Throughout the war, he wandered from village to village and one day he lost his speech. Years later, in a skiing accident he regained it. This version of the story bears a perfect similarity to the Jewish kid in the book that brought Kosinski universal fame.

The Painted Bird is a tale of a young boy, presumed to be Jewish or a Gypsy, who is abandoned by his parents during World War II and begins a nomadic life of solitude as he moves or is moved from many Slavic villages. Each time he thinks he has found a place of safety, he is then subjected to prejudice, abuse and experiences that leave him near to death from the actions of the occupants. This treatment stems from his background and the subsequent fear held by the villagers that harbouring anyone who may be a Gypsy or Jew will lead to reprisals from the occupying German army.

In the first several chapters of the novel the little protagonist is firmly convinced that demons and devils are part of the tangible, physical world. He actually sees them. They are not mythological imaginings confined to a fuzzy spiritual world. They are real, and he believes the villagers insistence that he is possessed by them. Even their dogs seem to believe in this credo, chasing, biting, and barking at him as if a viciousness towards dark-haired boys is programmed into their genetic makeup. The text of the villagers behavior reads like a gruesome car accident on the side of the road at which one cannot help but crane one´s neck. It is both repulsive and compelling; one reads in a state of disbelief and horror. The cruelty, moreover, isn´t limited to Jews and Gypsies. Anyone getting in the way is targeted. A stirring example of this phenomenon is when the protagonist
witnesses a jealous miller gouging out the eyes of his wife´s object of lust, an otherwise harmless 14-year-old plowboy whose only sin was gawking and leering at a woman´s bosom:

And with a rapid movement such as women used to gouge out the rotten spots while peeling potatoes, he plunged the spoon into one of the boy´s eyes and twisted it. The eye sprang out of his face like a yolk from a broken egg and rolled down the miller´s hand onto the floor. The plowboy howled and shrieked, but the miller´s hold kept him pinned against the wall. Then the blood-covered spoon plunged into the other eye, which sprang out even faster. For a moment the eye rested on the boy´s cheek as if uncertain what to do next; then it finally tumbled down his shirt onto the floor.


One of the key aspects of this is that Kosinski is writing about a wholly adult subject from the perspective of one who is barely out of early childhood, therefore as the narrative develops each understated naivete is ripped away to reveal the harrowing truth lying just below the surface.

In The Painted Bird, Jerzy Kosinski tells of the wanderings of a young boy during World War II. The boy, six years old, becomes the object of brutality and prejudice, all of which stems from a combination of peasant superstition and Nazi hatred.

This book answers many question about the human soul and is a great experiment with the human psyche. You can find there some absolutely horrifying graphic, disgusting shows of man's brutality but you almost becomed numbed by reading it. By the time you hit the scene with the invaders at the end who rape and torture the women, it doesn't even seem as bad as half of the other stuff. Some claim his only masterpiece was the Painted Bird while others that Being There is the real work of genius.

I have no intention to come to a point that he was a liar or not; or wheter he Painted Bird was his auto-biography or not; but as far as I am concerned, the controversy about his life story only serves to make him more mysterious, delirious, and insidious─interesting. This is one of these books you'll never forget!

Posted by marciano guerrero at 9:43 PM