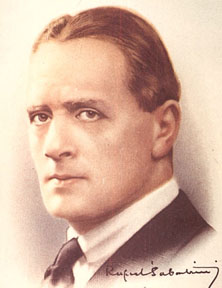 Swashbuckling prose! After reading a few newspaper and magazine articles I immediately pick up Rafael Sabatini’s Scaramouche and read one or two chapters. Journalese is so turgid and cheap that I need a good dose of a good prose to balance my day.

Writers today should do the same and learn the elements of vivid prose.

Sabatini’s Scaramouche is a tale of the French Revolution─a veritable page turner. It never lets up until we are done with it; even despite the fact that we already know the outcome of the revolution. The Baroness Orczy's The Scarlet Pimpernel is another great book about the French Revolution; however, the prose doesn't come near the quality of Sabatini's Scaramouche. Although the Baroness Orczy's writing is lucid, it is much inferior because it lacks sentence variety.

Although one of the main strands of the novel is revenge─a psychological theme to be sure─it doesn’t read as a psychological treatise as D.H. Lawrence’s Sons and Lovers does.

While writers like Henry James, Don DeLillo, and Jonathan Franzen lull you to sleep with their bromides, Sabatini energizes and electrifies the reader.

What is Sabatini’s secret?

A good deal of it is the sentence openers—which are never ever duplicated─and a timely use of the Absolute. If you wish to be a fair writer, then you owe it to yourself and your readers to master the different forms of the Absolute.

These two techniques will levitate first and then make your prose soar to new heights. Do not understimate the power of grammatical constructs to thrust the narrative drive with jet-engine power. Once we understand the power of sentence openers and the role of absolute phrases, we can then see why the Baroness Orczy's novel is so inferior to Sabatini's--she was unfamiliar with them!

Posted by marciano guerrero at 11:22 AM