Saint Augustine, The City of God 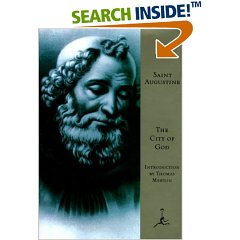 Because Augustine's The City of God has been a companion for so many years, it’s neither an adjunct nor an extension, but part of me, of my mind.

Whenever I read a book and feel disappointed by it─as for example: The Dante Club, by Matthew Pearl─I quickly pick up The City and read a few pages. My faith in good writing is then restored. Besides the wisdom one finds in his book (Augustine being a rhetorician), one finds sentences that flow and gurgle in a crystal stream of sheer magic.

That is not to say that it is a perfect book, for it contains some gross generalizations and prejudices as when he inveighs against Jews: “Indeed, a similar sign appeared when the Lord was crucified by the cruel and impious Jews.”

To make his case (a defense of the charge that the Christian church caused the sack of Rome), Augustine deploys an arsenal of rhetorical weapons. And knowing he was writing a huge book, he made the writing athletic, quite acrobatic I’d say--never boring. To wit: "For evil has no nature of its own. Rather, it is the absence of good which has received name 'evil.'" Or,

How much more honourable a thing is to believe that which was taught by holy and truthful angels; uttered by prophets inspired by the Spirit of God; proclaimed by Him Who was foretold as the coming Saviour by the messengers who went before Him; and preached by the apostles whom He sent forth, and who filled the whole world with His Gospel!

Why is The Dante Club boring? Because it is narrated with the pattern subject-verb-complement throughout. How long can a reader take of this annoying pattern before he puts the book down?

Well, while I only read 24 pages before I put The Dante Club book down never to pick it up again, I will go on reading The City─its 1,200 pages─a lifetime.
The writing techniques I employ in this article are all explained in Mary Duffy's writing manual:

Posted by marciano guerrero at 4:23 PM