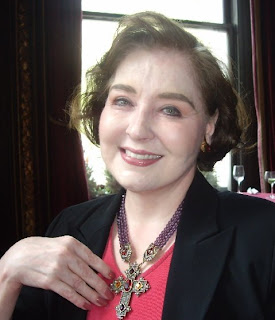 The faculty of speech flows from the deepest founts of wisdom.
Cicero

Absolute phrases add a sense of action and simultaneity to the main idea in a clause or sentence. They are, without a doubt, the most effective tool that a writer has to depict scenes filled with details that create action and suspense. No other tool exists that is more efficacious.

Nothing enlivens a scene as well placed Absolutes.

Through the apprehension of details all human beings—but in particular, readers—filter whole scenes in order to grasp, evaluate, and pronounce judgments about actions, places, and thoughts.

What gives versatility and flexibility to the Absolute phrase is that it may be embedded just about anywhere in the clause or sentence (beginning, middle, or end). Absolute phrases supply the much needed details at the right time and the right place.

Observe—in the example below—how nouns and the present participle interact:

The trees seemed to advance—to close ranks—as if in menacing formation, branches flailing, trunks forming cavities resembling huge distorted mouths from which the most horrifying and ungodly screams seemed to issue, filling the swamp with a hellish cacophony (Guerrero 210).

They—absolutes—highlight the immediacy of the action, causing it to unfold right in front of the readers’ eyes. But how can these bits of information—details which are so unrelated to the main idea, even illogical one might say—be so loosely tacked on?
Fortunately for writers, the English language allows for this type of non sequitur. It is a part of the language that not even grammarians such as Otto Jesperson and Henry W. Fowler, or linguists (including Noam Chomsky) have been able to explain with convincing adequacy; a conundrum as puzzling as ‘why do humans grow arms and not wings?’

Writers should be thankful for such aberrations of the English language, and take advantage of them.

In addition to the present participle form of the verb (tears coursing down her cheeks), we may also use the past participle to form another variation of the
Absolute:


Because many grammar and syntax textbooks begin the discussion of Absolute Phrases with convoluted definitions, regrettably many readers abandon the topic, never to revisit it again. So, let’s look at what Absolutes do, what they accomplish, and then at the end of the chapter we’ll attempt a working definition.

Forms of the Absolute

Although Absolute Phrases may be written in many ways, the following four usages are the most prevalent:

The thug saw him and hurried to the waiting Honda, which took off with a loud squeal, screeching and lurching forward, the engine revving up (Guerrero 22).
Just then Morales opened his eyes only to see the old man’s harsh stare, his droopy eyelid twitching (Guerrero 145).


As you can see in the above example, the noun eyelid is qualified by ‘his droopy,’ implying that any qualifier may either antecede or follow the noun; yet, this fact doesn’t negate that the phrase is an Absolute Phrase formed by a Noun + Present Participle.

The bullet ripped the stick out of the huge man’s lips hitting the wall with a thud, Gil’s lips turning ashen, teeth chattering, and clicking like gag dentures (Guerrero 193).

But just as he said this, the floor under the hand truck caved in, the smile fading off his face (Guerrero 162).

“And Lord Julian, then?” he asked, his eyes watching her, bright as sapphires in that copper-coloured face (Sabatini 337).

Cowboy felt the frigid mud shifting and tugging downward at his feet, sucking and crushing around his waist and chest, large bubbles surfacing, gurgling and popping around him, filling his nostrils with the vilest putrid stench (Guerrero 162).

He did things to me that I’d only read in books, and at the end of it, legs trembling, heart thudding, I laughed and he buried his face against my belly, laughing too (Grafton 177).

By now you should have noted how the —ing participials cause the nouns to zoom in and become extremely visible.

As Joey and Lenox strode to their van, Cowboy felt eyes watching him, his rat-tail stiffening, and a chill running down his spine (Guerrero 103).


Even though the narrator purports to be objective and camera-like in his observations, he manages to inject inner-state details that only an omniscient narrator could know. This technique empowers the writer to get inside the character’s mind, body, and even his central nervous system: “a chill running down his spine.”

We puttered past the barn, the diesel thumping, the trailer creaking, and turned south toward the lower forty, a tract next to Siler’s Creek (Grisham 43).


Best selling author John Grisham, by his adroit use of two Absolutes (‘diesel thumping’ and ‘trailer creaking’), augments the acoustics of the passing scene. Had he chosen to simply say, “We puttered past the barn, and turned south …” the scene would have fallen dead on arrival.

And from Stephen King’s Cell:

Jordan drove the bus into the middle of them and there it stopped, headlights glaring, grille dripping (324).


Note how Jane Austen in Pride and Prejudice uses the Absolute to objectify an otherwise internal sensation felt by a character:

Elizabeth made no answer, and walked on, her heart swelling with indignation (109; ch. 33).


And feel the chills Bram Stoker brings to the reader as he depicts count Dracula’s wrath:

As my eyes opened involuntarily I saw his strong hand grasp the slender neck of the fair woman and with giant’s power draw it back, the blue eyes transformed with fury, the white teeth champing with rage, and the fair cheeks blazing red with passion (273).


The Absolute ‘the blue eyes transformed with fury,’ is discussed below, as it belongs to Group (2), since ‘transformed’ is a past participle rather than a present participle.

To conclude this section, see how Tolstoy uses this absolute construction in his novel War and Peace:

“Do you or do you not know where that will is?” insisted Prince Vasili, his cheeks twitching more than ever (65).


Pierre obediently sat down, his eyes asking if he were doing right (71).
The spot chosen for the duel was some eighty paces from the road, where the sleighs had been left in a small clearing in the pine forest covered with melting snow, the frost having begun to break during the last few days (273).

Absolutes: Group (2) – Noun + Past Participle
Less dramatic than the —ing Absolute is the past participle Absolute. While the former causes the action of the noun to unfold in front of the reader’s eyes, the latter conjures up an image of something that has already happened.

His head-piece was gone, his breastplate dinted, his right sleeve a rag hanging from his shoulder about a naked arm (Sabatini 331).
“I’ll check with them, Joey, and then I’ll let you know. Where are you planning to bury them?” he asked, his forehead wrinkled with curiosity (Guerrero 159).
…he charged straight on howling with wild fury, arms flailing, and eyes closed (Guerrero 230).

In his mind he saw the picture of the boy that the police photographer had taken, his flesh eaten black by the flames (George, In Pursuit of the Proper Sinner, 267).
His men stood, grinning, awaiting orders, the two prisoners now fast pinioned (Sabatini 16).

Her friend, Pixie Dark, was backing away from the whole deal, small white hands clasped between her breasts, eyes wide (8).

“Did they speak English, them souls?” asked Lenox, his eyes bright with fear (Guerrero 207).


‘Eyes’ is the naked noun, but as you can see: it is anteceded by the possessive adjective ‘his’ and followed by the adjective ‘bright’ and then the prepositional phrase ‘with fear.’

As for mademoiselle, she had risen, and was leaning forward, a hand pressed lightly on her heaving breast, her face deathly pale, a wild terror in her eyes (Sabatini 158).

For a moment she seemed to hesitate, then she plunged forward again, her beak-head in splinters, her forecastle smashed, and a gaping hole forward, that was only just above the water-line (Sabatini 328).


Reverend Sykes was looking down at us, black hat in hand (Lee 164).

But let there be no doubt as to the power of the prepositional absolutes, an example of which we find in Abraham Lincoln’s Gettysburg Address: “ --government of the people, by the people, for the people, shall not perish from the earth.”
It is this form of the Absolute that may be considered a pure Absolutus—a totally independent unit—since lacking a verb, it has no logical connection whatever to the rest of the sentence.

Note how the adverbs modify the noun to form the absolute in the next example:
Cornered, and with nowhere to go, Pucci stood on his hind legs, ears down, front legs up, fur straight out, ready to attack.

Placing the Absolute
In the following example, we can see that Absolute phrases are ubiquitous. They may be placed in an initial or final position in relation to the governing clause (which includes the subject: the brothers and the conjugated verb: screamed and pushed).

Their eyes grinding with panic, the brothers screamed and pushed away, as the full length of the corpse floated up, the skull fastened to the skeleton by black cords of rotted flesh. (Guerrero 210).


Being a powerful tool, the writer should reserve its use for climatic scenes filled with emotion, suspense, and spectacle. The indiscriminate use of the Absolute will dilute its effectiveness.
Before we define the Absolute, let’s see how Gabriel Garcia Marquez, in his novel Love in the Time of Cholera, deploys and combines the four different types of Absolutes we’ve discussed above:

She walked with natural haughtiness, her head high, her eyes unmoving, her step rapid, her nose pointing straight ahead, her bag of books held against her chest with crossed arms, her doe’s gait making her seem immune to gravity. (56).


Defining the Absolute
Absolute Phrases—formed by attaching participles, prepositions, and adjectives or adverbs—function as an adjective; that is to say, they modify not only a noun, but an entire clause or sentence.

The general rule of grammar is:

All the elements in a sentence must be logically connected.
The exceptions to the above rule are the Absolute Phrases, which dance to their own rhythm in orbits outside the weight of gravity of the main sentence.
Not only do Absolutes act as modifiers, but they also act as independent units with little or no logical connection to the main clause or sentence, hence their name: Absolutes.

Ernest Hemingway was the master of the Absolute. Yet, by today’s standards his fiction is neither exciting nor fast-paced. In fact, some contemporary critics and readers only tolerate it. Detecting a “minor vision of life” in Hemingway’s work, Louis Auchincloss in Writers and Personality says: “The enormous popularity of Hemingway’s novels and stories has often surprised me.”

You might be wondering how the work of the master of the Absolute could be tedious.
The answer is that while he was a genius in injecting Absolute phrases in the right place and precise fictional time—such as action scenes: bullfights and fistfights—, he ignored all the other tools.

Worse than having a myopic vision of life, I believe, is writing with the pattern Subject—Verb—Complement (S-V-C), and Hemingway did just that. Seldom will you find in his novels appositives, a variety of sentence openers, or inversions, nor will you read rhetorical figures. What was once hailed as brilliant simplicity, now reads, to many, as flat or boring.
For a properly formatted PDF copy of Mary Duffy's writing manual:
Mary Duffy's Sentence Openers


Back to main page

Posted by marciano guerrero at 2:25 PM