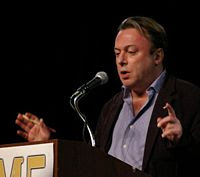 If a painter could capture on a canvas the ideal image of smugness and elitism, he would paint Christopher Hitchens.

Elitism, in my estimation, isn't about money, intelligence, or accomplishment: it is about the attitude of "being superior to others." To see Hitchen on TV is revolting; not only is he oily, pompous, but also condescending. And if you watch him on tv or read his books, he'll make you believe that he owns a greater mind than Plato, Augustine, Aquinas, and Jefferson put together.

What is this man's agenda? Destruction of the United States? Those of us who served this great country in the military --either in peace or war-- cringe at what he spews. For someone so enamored with the convicted and harmful doctrine that is marxism, he surely loves to live in the United States of America. Why aren't Cuba, Venezuela, and Russia willing to give him a visa?

Why would the State Department give a green card to an avowed communist (Troskyist revolutionary), atheist, and overall hater of the United States? Don't we have enough domestic native terrorists, misogynists, and xenophobes that we have to import another one?

Posted by marciano guerrero at 9:05 AM