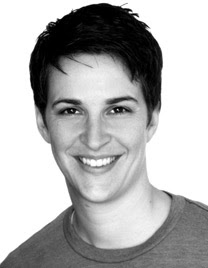 To think that Marxist dialectics is still being practiced in America boggles the mind. And on TV, to boot! To hear liberal academicians still spew thesis, antithesis, and synthesis isn't so bad, but to hear such gibberish from a TV commentator in the 21st Century is baffling. Are we regressing?

Let me give you a paragraph of history:

Marx (using Hegel’s dialectics) attempted to discard the system of binary opposites. He attempted to replace it with a more universal triad of concepts: thesis, antithesis, and synthesis. The result was the now defunct Dialectic Materialism (thesis: the feudal class system; antithesis: the bourgeois class; synthesis: the proletariat). If you oppose two ideas, out of the clash a new one is born--supposedly.

More than 125 years later (after Marx's death) Rachel Maddow has resurrected the very same Marxist method of argument. When Hurricaine Ike was devastating Galveston and Huston, Rachel's political commentary was mirroring the natural disaster: thesis--water, antithesis--electricity, synthesis--McCain suspends Republican convention. Were this form of corrupted marxian dialectics not laughable, it would be dangerous.

Who had the insulting, if not dangerous idea, to put this woman to analyze American politics with "Dialectic Materialism" tools? Well, as long as she gets the ratings I supposed CNBC will be safe. But why not say what she is--an avowed Marxist? Is it too much to ask for honesty and full disclosure in the airwaves (radio and tv)?

Tune in and try to detect her marxist techniques. Once you get it you will understand why she is such a passionate advocate of Senator Obama: Obama--the most liberal senator--is as close to marxism as two coats of paint (pink and red). Might I remind readers that "Black Liberation Theology" is an offshoot of Marxist Liberation Theology as preached and published by the Jesuit priest Gustavo Gutierrez, in the 1960s.

When in the late 1960s Louis Althusser's "Structuralist Marxism" fell flat and stiff on its back (as if in a casket), I thought that was the last marxist gasp. Is another incarnation of such discredited and convicted ideology needed? Apparently Rachel Maddow thinks so, and so does CSNBC.

That she is a lesbian, I accept, just like millions of Americans do. But that she is a Marxist? To attempt to revive an extinct ideology that was the vehicle for the likes of Stalin and Lenin to slaughter forty million human beings, is morally reprehensible.

Posted by marciano guerrero at 10:23 PM