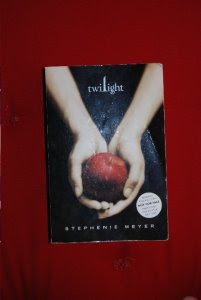 Jess drove faster than the chief, so we made it to Port Angeles by four. It had been a while since I've had a girls' night out, and the estrogen rush was invigorating. We listened to whiny songs while Jessica jabbered on about the boys we hung out with. Jessica's dinner with Mike had gone very well, and she was hoping that by Saturday night they would have progressed to the first-kiss stage. I smiled to myself, pleased. Angela was passively happy to be going to the dance, but not really interested in Eric. Jess tried to get her to confess who her type was, but I interrupted with a question about dresses after a bit, to spare her. Angela threw a grateful glance my way.[chapter 8, Twilight]

Stephen King, in a recent interview said: “Both Rowling and Meyer, they’re speaking directly to young people… The real difference is that Jo Rowling is a terrific writer and Stephenie Meyer can’t write worth a darn. She’s not very good.”

Mr. King might just be right in his criticism, not because he is jealous of Meyers' success, but because--as we can see in the above excerpt--Meyer's writing isn't writing at all, but typing.
Augustine, City of God
Austen J, Pride and Prejudice
Austen J, "Marriage Proposals and Me"
Austen J, Emma
Borges, The Aleph
C. Bronte, Jane Eyre
Burroughs E,Tarzan
Cervantes, Don Quijote
Chaucer, Wife of Bath
Coelho P,The Alchemist
Coyle H, They Are Soldiers
Dante, New Life
Dickens C, David Copperfield
Dostoevsky, Crime&Punishment
ConanDoyle,Hound of Baskervilles
Dubner S, Superfreakonomics

Posted by marciano guerrero at 4:36 PM