An East of Tiffany's Story: Marc Morales and Morals 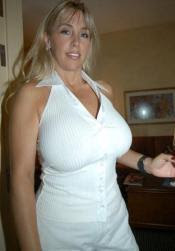 Sunday afternoon. After spending a good hour at Borders (57th and Park Avenue), I went to Staples (right across the street) to buy a rim of paper for my printer. Since I am a cop —on and off duty— I always take a quick look of the whole scene of any place I go. By the pens and markers section I saw a tall blond (her back to me) talking to a man who looked like Yo Yo Ma (the renowned cellist). Didn’t make much of it; the store was a little empty, unlike weekdays when it is usually crowded. So I went about my business.

Before long I found myself at the computer shelf, just curious, testing the keyboard for the new Notepads. So engrossed was I in the damn gadget that —though sweet and low— a female voice startled me:

“How much do they weigh?”

“Less than three pounds,” I replied.

Wowza! The chick next to me was a six-footer, blond hair cascading on her shoulders, white jeans, oversized $300 Marc Jacobs sunglasses on top her head. I am a cop, so I’m trained to size up a person in mini-seconds. Major babe, I thought. Although she might not have been as well schooled as me in sizing up people, I could tell right away that she was processing me. I could see her slow scan traveling from toes to fingers to my hair; and then she locked eyes with me. People tell me I look like Mario Lopez, except that Mario has black hair and dimples, and I brown hair and pimples. So I figured she liked celebrities, or why would a good looking woman approach me? I usually initiate the chase.

After some innocuous talk about the Swine flu and some techie talk, I got a little personal and said,

“Tall and pretty as you are, you gotta be a model.”

After and awkward moment, as we both waited for the other to lead on, I held my tongue as well as her stare.

“I freelance,” she said.

When you make detective in the Force, you get to take classes, workshops, and seminars in interrogation techniques. As it is I am totally unschooled in this aspect of human relations. Yet my instinct told me that because she was picking her words with caution, she was prodding me to keep talking and to keep asking questions. Hmm, I thought, she wants me to ask her ‘freelance what’? But I won’t.

Before I became a cop, I sold mutual funds for a while. My sales manager always told me, “Be in control; don’t let the prospect anticipate your answer—or they’ll have a ready answer—‘no’ in most cases.” Being a salesman can teach you a lot about people--lots of psychology for sure. But there's no substitute for a good college education. Thank God, come September I'll start at John Jay College of Criminal Justice. So, instead of asking the obvious follow up question ‘what do you freelance?’ I asked her,

“You work in Wall Street—investment banking?”

That caught her off guard. “First time anybody ever said that to me.”

“Hardly. That field is in the dumps; can’t make money there. Besides, I hear every housewife that gets divorced applies for a real estate license.”

I smiled and said nothing.

Digging into her big Prada bag --which go for $2,500, unless is a knock off, in which case is only $25-- she pulls her iPhone, touch-screens it daintly, and looking into my eyes, she casually says:

It only took a fraction of a second for her to detect that my eyes showed that I had understood what she just said. I could just see the wheels turning on her street-smart mind: Cop on the floor. Run! Right was she. Only a cop would know that 10-52 means "dispute in progress." Totally in control, nimble and wing-footed she ambled past the cashiers counter, on her way out the door.

"Wait," I wanted to yell, but no sound came out of my mouth.

More than disconcerted, disappointed, or even disheartened, I felt like a fool.
I’ve responded to lots of calls for help, misdemeanors, petty crimes, street disputes, anger-management situations, traffic violations, domestic violence, shop lifting, etc. Like medical doctors, I’ve developed immunity to pain and virtue. I guess you can say I am a bit of a cynic. And like that French philosopher Descartes, I tend to doubt people. But somehow I was rooting for her, wishing and praying subconsciously that she was a good decent egg.

Humiliated, outsmarted, outfoxed, and craving for revenge, a little voice inside my skull told me, “Don’t just stand there like a dummy with your jaw unhinged. Check her out.” So, I walked over to the manager, who is an amiable man, and I asked him,

“Did you see the tall blond…she was here a few minutes ago.”

“Does she come here often?”

“Meets people here. During the week she goes for the executive types, them with the expensive suits, dress-shoes, silk ties—you know well-heeled dudes. The older set.”

“Why would she approach me?”

“I asked myself the same question. I Figgered she liked you.”

I’m gaining a lot of respect for this guy. So I’m brazen and asked a blunt question: “Is she a hooker?”

“I have her card, behind the register. Dudes many times aren’t interested in her services, so they throw them out in the trash can.”

That evening I searched Twitter and Facebook, and yes, she came up. Nice face shot. Nice body shot. In Twitter she has almost two thousand dudes following her. So, just to be thorough, I also ran a search in Craiglist—lo and behold, she was also listed there: masseuse.

Now I am torn.

I am a tough ambitious, 'don't get on my way' type of man, and can’t wait to make detective. But now I have a moral dilemma: should I give Vice a tip? I really gotta think hard about his.

My old Accounting teacher at LaGuardia College --of which I am a graduate, Paralegal Studies-- once said that he lived by this saying: "Love God and do whatever you want." It's only now that I'm beginning to understand what he meant.

Yo, man--I need help. Just because my name is Morales doesn't mean I have to be moral--does it?

The writing techniques I use are explained in Mary Duffy's Toolbox for Writers e-book.

Posted by marciano guerrero at 1:31 PM