What is an Allegory? 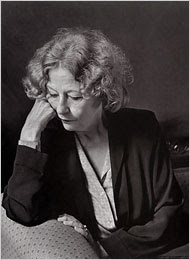 Allegory is an extended metaphor. Plato’s allegory of the cave extends the metaphors of darkness and enlightenment; and ignorance and true knowledge throughout Book X, of The Republic.

But shorter allegories are frequent and effective, as we see in Elizabeth Hardwick’s American Fictions:

In his love life, he is something like a telephone, always engaged, and even then with several on hold. Whether he wished so many rings of his line is hard to tell; perhaps he was one of those who would always, always answer. In any case, among his callers were … (Hardwick 31).

And in Nikos Kazantzakis’ Zorba, The Greek:
Zorba, the prince in disguise, also stared at her, as if she were an old comrade, an old frigate who had fought on distant seas, who had known victory and defeat, her hatches battered in, her masts broken, her sails torn—and now, scored with furrows which she had caulked with powder and cream, had retired to this coast and was waiting (Kazantzakis 29).

Posted by marciano guerrero at 10:53 AM