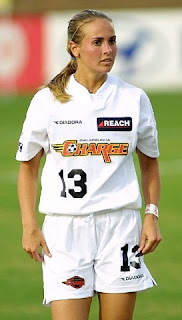 Heather is now a defensive left back with the Boston Breakers and a shining star in the WSL — Women’s Soccer League.

Not only is Heather a tough and shrewd defender, but also a fierce attacker who joins the strikers, creating havoc inside the penalty area. Her arrow-like incursions into the heart of the opponents are reminiscent of the Brazilian star Carlos Alberto. For a soccer player to do these dashes, the player must be in superb physical condition, for it takes another mad dash to return to the defensive line.

U.S. National Team: Before 2004, she had played five times for the full National Team, one match each in 1999, 2001, 2002 and two in 2003. In 2008: Returned from major knee injury just in time to be considered for a spot on the Olympic Team, starting all three of the USA’s domestic games over late April and early May …Since returning from her injury, she started all 11 games the U.S. played heading into the Olympic.

Professional / Club: Selected in the second round of the inaugural WUSA Draft by the Philadelphia Charge. She started in all 51 games in which she played for the Charge over three seasons, helping the club to the WUSA playoffs in the first two years; and was a WUSA All-Star in 2003. College / High School: Played at University of Florida from 1996-1999 and ranks as the all-time leader in games played (95), starts (94) and minutes played (7,547) … Only game she didn’t start was the very first game of her freshman year. Heather helped the Gators to its first and only NCAA title in women’s soccer in 1998. She was named Most Inspirational Player as a freshman at UF and was team MVP as a senior.

Personal: Heather Blaine Mitts graduated with a degree in Advertising and has worked for ESPN as a sideline reporter on college football during the 2005 seasons, serving also as a studio analyst for ABC/ESPN/ESPN2 during the 2003 and 2007 FIFA Women’s World Cups and was the sideline reporter for several MLS broadcasts in 2005 and 2006.
And a little known but daring feat: “Ran with the Bulls” in Pamplona, Spain in 1999

The writing techniques I use are explained in Mary Duffy's Sentence Openers e-book.

Posted by marciano guerrero at 11:46 AM