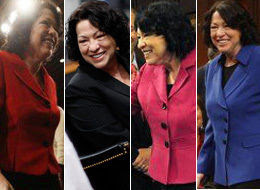 Another wonderful accomplishment for the people of the United States of America.

Despite the shrieks, moans, and shrill outcries of some Republican senators (Jeff Sessions and Lindsay Graham), the good judge will be confirmed. That these senators latched on to one or two phrases from her speeches and attempted to cast doubt on her judicial accomplishments, is laughable if not reprehensible. While her record showed a steady, sober, and unequivocal passion for the rule of law, these men ignored it.

The First Amendment --according to senators Sessions and Graham-- applies to everyone except judges.

The TV low-drama highlighted the fact that some political cro-magnon-men will still throw rocks --speed bumps-- on a good woman's path to excellence.

Posted by marciano guerrero at 12:11 AM