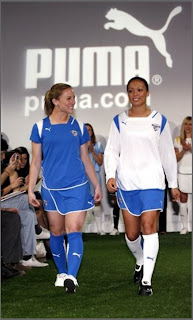 Amy helped Southern California to a surprising NCAA title in November 2007, scoring twice to defeat rival UCLA; she was named the MVP of the Final Four.

One of the fastest players on the U.S. national team, Rodriguez is now with the Boston Breakers. It appear the head coach is giving her little play time because she had a couple of bad games. But being a natural born striker, she is expected to come back to her top form as when she scored in a 1-0 win over Brazil at the Peace Queen Cup on June 17 at South Korea.

An electrifying forward like Amy Rodriguez should not be benched. People pay good money to see her--not the coach, Tony DiCicco.

The lamest excuse that DiCicco has provided the press --ESPN Soccer-- is that Amy is a little burnt out. Such excuse leads me to question his knowledge of the game. Who has ever heard of a 21-year old player getting burned out from soccer? No soccer player ever should be accused of that. Soccer is a passion and the longer a player plays the more his or her passion for the game. Burn-out? Only in the mind of a mindless coach.

Did Maradona burn out? Did DiCicco himself burn out? Of course not. Players become managers to stay close to their passion.

It's time to give Amy more play time! Or let's hold the executives --rather than DiCicco-- directly responsible for the mismanagement of the Boston Breakers.

Posted by marciano guerrero at 9:42 PM