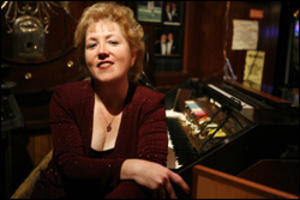 Last Saturday night a friend of ours had some visitors from out of town, and asked us to meet with them at The Rum Bar for a ‘fun night.' And a fun night it was!

The Rum Bar is located in the lobby of the Edison Hotel, right off Broadway, on 47th Street. Although I’m not familiar with the hotel facilities —and I understand the place has many that they are proud of— I am much acquainted with the Rum Bar, for over the years I’ve spent quite a few nights there.

For those of you who might be wondering why I’m writing this piece, let me set your mind at ease: I’m in no way connected, get paid, or receive gifts from the either the hotel or the bar. To inform my readers of what a New York City fine time is, is my motivation.

Two sections are immediately discernible as you walk into the joint; the largest piece of real estate belonging to the long bar —the altar— where the serious worshippers of the god Bacchus not only offer their libations, but also they make them disappear faster than I can change channels with a remote. A piano/organ occupies the smaller remainder of the space.

I’ll talk about this: the piano bar section.

Karen Brown, the resident musician and gifted pianist-organist, plays and sings just about any song anybody can think of and request. Her repertoire is just fabulous. And if she doesn’t know a song by heart, she will dig up her indexed music books and in no time she’ll produce the sheets. Since I don’t sing, I pretty much observe and enjoy watching Karen accommodate requests and those who wish to sing.

Besides having a prodigious musical memory, Karen also seems to be endowed with name recall and ‘face recognition’ virtues, for she never gets a name wrong.

For a while she sings the crowd’s favorites, which range from Cole Porter, George Gershwin, Rogers and Hammerstein to Broadway Show songs, and on to more contemporary songs made famous by Sinatra, Peggy Lee, Streisand, Tony Bennett, Vic Damone, Patsy Klein, Elvis Presley, etc.

Around 10 PM, the real troopers —including some big name celebrities— from the Broadway shows begin to filter in to regale the audience with some of their own personal favorites. 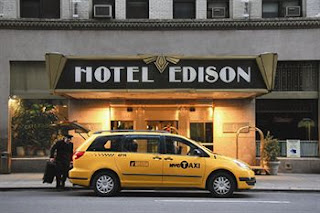 Last Saturday night I had the pleasure of listening to “Sam the Drummer,” who not only sang some oldies, but also told some jokes with such perfect delivery that would put to shame Jerry Seinfeld, or even Jay Leno. And should I mention that Sam is 89 years young? Who cares? The man showed the younger set what laughter and music can do for the soul and the body! Anyway, for anyone to follow him would have been a tough go indeed. But his wife followed him, and she outdid him! She sang some delightful comical songs that were even more hilarious than Sam’s jokes.

As I walked around and mingled a little, I met lots of people from Europe: a couple from Wales, a group from London, and another from Norway. And of course there was a contingent of Chicagoans, who were drowning their sorrows away at having lost their bid to Rio de Janeiro for the 2012 Olympics.

For the price of a few beers and drinks (no cover), New Yorkers and visitors can have a grand time. The Rum Bar is a smoke-free facility and safe to boot. No one hassles you and if people get loud and obnoxious, the waiter —Thai, who also sings by the way— will escort them out.

For 14 years the gorgeous Karen Brown has entertained her crowd of faithful followers five nights a week from 9 p.m. to 1:30 a.m. The wood-walled bar is just right for this kind of open-mic entertainment. Even if you don’t sing, soon you’ll be joining in and mouthing “Crazy,” “Fly Me to the Moon,” or “The Girl from Ipanema.”
Whether you are an American or a visitor from other lands, and are coming to New York City, and if you ever want to see and hear a woman with perfect pitch—come to The Rum Bar: Karen Brown will welcome you and your guests. Just make sure you tell her Marc sent you.
The writing techniques I employ in this article are all explained in Mary Duffy's writing manual:

Posted by marciano guerrero at 2:34 AM