The Wife of Bath: Feminism, Womanism, or Neofeminism? 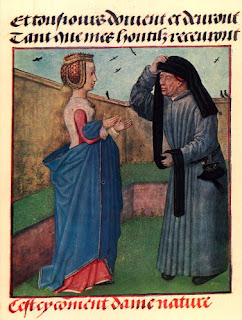 Every time I read Chaucer’s “The Wife of Bath,” (prologue and tale), I come with a different conclusion as to what the good wife did actually want or aspire to in life. I won’t comment on what the author meant to convey; I will leave this to the end. In this last reading I want to comment on Dame Alice’s motivation in telling us her tale.

Within a few verses the Wife tells us that her story will be about her personal experiences and marriages—all five of them:

That marriage is a misery and a woe;
For let me say, if I may make so bold,
My lords, since I was but twelve years old,
Thanks be to God Eternal evermore,
Five husbands have I had the church door;

As I read the poem-story, nothing to me is more delightful than to visualize the woman’s visage:

Yes, I’m gap-toothed; it suits me well I feel,
It is the print of Venus and seal,
So help me God I was a lusty one
Fair, young, and well-to-do, and full of fun!

Isn’t this the picture of a lively character? Not only is she young, fair, rich, full of fun, but also well-to-do. And if we add an appropriate dress we can complete the picture: “And always wore my gayest scarlet dress.”

Under no circumstance should we interpret Dame Alice as an early feminist as we understand the term today: someone who advocates the social, political, and economic equality of the sexes. Of course the feminist movement has spawned many other more radical stances, but the core belief will suffice: feminists want equality.
Yet, throughout the prologue we see that the Wife doesn’t really want equality but woman’s supremacy. Today she could be called sexist.

Likewise, in the actual tale, the queen sends the offending knight in a quest to find the answer to the questions of the ages: “What is the thing that women most desire?” To save his life, the knight must return with the right answer in a twelvemonth and a day’s time. And the correct answer he submits turns out to be that what women most desire is the supremacy of woman over man:

‘A woman wants the self-same sovereignty
Over her husband as over her lover,
And master him; he must not be above her …’

When novelist Alice Walker coined the term ‘Womanist prose’ she meant to highlight the plight of the African American woman, whose condition was different from the constraints suffered by white feminists. Womanism has of late come to mean a benign sisterhood free from ill will to men.

But the Wife of Bath if full of ill will towards her five husbands. Womanism isn’t applicable here, for not only is she jealous, but she is also vindictive and cruel:
I told you how it filled my heart with spite
To see another woman his delight,
…
By God on earth I was his purgatory.
…
How many were the ways I tortured him,
And when she buries her fourth husband, at the very same funeral, she flirts with Johnny —the handsome former Oxford student— and wins him to become her fifth husband. And just like she did with the previous husbands, she strips them of their manhood, house, land, and wealth.

Unsatisfied, ribald, and lascivious, Dame Alice seeks pleasure in and outside marriage. In this context we can say that the neofeminist paradigm fits her well: “love me for my body—not my mind.” This man-hungry model fits her well since throughout her narrative she alludes to her strong sexual proclivities. To short circuit censorship and to avoid vulgar language, the Wife refers to sex in a variety of ways: “Silly instrument,” “In wifehood I will use my instrument,” “My husband, he shall have it eve and morrow,” “And was unable to deny in truth, My chamber of Venus to a likely youth,” and my favorite stanza:

‘What ails you, man, to grumble so and groan?
Just that you want my what-not all your own?
Why, take it all, man, take it every bit!
St. Peter, what a love you have for it!
For if I were to sell my belle chose,
I could go walking fresher than a rose;

Because in the end we can see that she is half deaf (from a beating), that she is a battered wife, and who despite the violence inflicted to her by her five husbands she only makes fun of her situation in life, one can assume that she suffers from low self-esteem.

To all this, what was Chaucer’s agenda? On first impression it seems that Chaucer is actually using the character of a picturesque woman to prove that women can be lethal to men. On a deeper level one can say that by exposing the husband’s abusive behavior, which in those years was common, he could bring about social change.
The writing techniques I use in this article are all explained in Mary Duffy's writing manual--an indispensable guide:

Posted by marciano guerrero at 6:02 PM