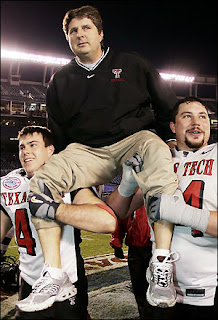 LUBBOCK, Texas (AP)—Texas Tech fired coach Mike Leach on Wednesday, just two days after he was suspended by the school as it investigated his treatment of a player with a concussion.

The school handed a termination letter to Leach’s attorney, Ted Liggett, just minutes before the two sides were to appear in a Lubbock, Texas, courtroom for a hearing on the coach’s suspension.

Liggett said Texas Tech general counsel Pat Campbell approached him outside the courtroom and told him that win, lose or draw in the hearing, Leach was out effective immediately.
FILE - In this Nov. 8, 2008 file photo, Texas Tech head coach Mike Leach walks back to the sidelines after a timeout in an NCAA college football game against Oklahoma State in Lubbock, Texas. Texas Tech has fired football coach Mike Leach. The school handed a termination letter to Leach's attorney, Ted Liggett, on Wednesday, Dec. 30, 2009, just before the two sides were to appear in a Lubbock, Texas, courtroom for a hearing on the coach's suspension.

Liggett told the judge there was no need for the hearing on Leach’s request that he be reinstated to coach the Alamo Bowl. Texas Tech plays Michigan State on Saturday in San Antonio.

As for Leach’s reaction, Liggett said, “Well, he’s not thrilled.”

Liggett said he planned to file a lawsuit on Leach’s behalf against the school “soon.”

“We can guarantee that the fight has just begun,” he said.

Liggett said Leach’s side has evidence that shows the decision to suspend the coach was without merit.

“So they pulled the trigger,” Liggett said. “They don’t want that coming out.”

In February, Leach and the school agreed to a five-year, $12.7 million contract. According to terms of the deal, Leach was due a $800,000 bonus on Dec. 31 if he were still the head coach at Texas Tech.

Leach was suspended by the university on Monday after receiver Adam James alleged the coach twice confined him to small, dark spaces while the team practiced.

James is the son of former NFL player and ESPN analyst Craig James.

“We appreciate that the university conducted a fair and thorough investigation,” said a statement from the James family. “From the family’s point of view this has always been about the safety and well being of our son and of all the players on the team.”


Mike Leach, Texas Tech coach, has been sidelined –suspended with pay-- while the school investigates complaints from wide receiver Adam James and his family about treatment after an injury.

Defensive coordinator Ruffin McNeill will be the interim coach and will lead the team in the Alamo Bowl on Jan. 2 against Michigan State.

But what is all the brouhaha about? It just happens that Adams James (the kid isolated in the locker) is James Craig’s son. James Craig is an ESPN analyst with a big megaphone. It isn’t the player, nor his friends, or the administration that have brought the complaints—James Craig did!

Reactions:
Wow.......not a good situation to be in for Leach, with concussions and all. Kinda sounds like sour grapes, though. College legend's son not living up to standards. Prima donna??
you play to win the game

1st maria grow up moron without question the dumpest comments you could have made. If this is true it is really a sad situation and at least on some level you have to assume it is true they did suspend leach. I find it sad that in this day and age one coach after another is coming under fire for what amounts to abuse. These men are paid millions of dollars a year and have less leadership skills and or self control then a marine drill instructor. It is time for even football coachs with thier monster egos to learn there is no reason or excuse for abusing those that have to answer to them.

I recently heard Craig James wants the coaching job at Tech.
James is worthless and would have never gotten playing time. This is his (and his dad CRAIG's) pathetic way of trying to stick it to the coach. Leach is the man. The James family should enroll their son in SWIMMING LESSONS, as he is OBVIOUSLY no football player.

Leach has a law degree and placed a kid with concussive symptoms in a closet. Doesn't add up....

I wish my Dad was Craig James, I would not have had to suffer the abuse and often reckless behavior of sadistic coaches. Oh well, you win some you lose some, but hopefully you walk away physically and mentally healthy from the game. If Leach did what they say he did he should be fired. He endangered the young person's health...Many coaches are fine people, but there are also many abusive coaches out there. I have played and coached and you are fortunate when you have people that actually care about you.

Is it just me...or does anyone feel like he will be fired before to long....
With all the focus on concussions. action like that can't be defended in anyway. Leach is in jeopardy of losing his job. I think maybe Texas Tech should fine him but unfortunately due to the fact that it will certainly impact recruiting in a negative manner he might be released especially if it holds true.

Cubano ... how in the hell is isolating a guy in an equipment closet endangering someone's health? BenGay fumes perhaps? :)

My question is, did the closet have food and drinks???? If so, then its all good, whats the prob????

I agree, Cubano, If, and only if, the allegations are correct, But whatever happened to innocent till proven guilty?
Terry L: it's not the punishment that's unusual. It's punishing someone in anyway for not practicing while dealing with a concussion. If you haven't been around in 2009 you might've missed the new focus on concussions by Congress and NFL due to the long term mental health including links to memory loss and other debilitating effects.

Playing after a concussion or even practicing is now frowned upon. NFL players Roethlisberger and Warner missed a crucial week of time while dealing with the symptoms.

the long term effects of concussions are thought to be damaging. So forcing someone to try and practice is unacceptable in this day and age.

BasketballFan88, but the kid's health was never in jeopardy. He was not forced to practice. Had Leach made James practice, then we'd have a real problem. Sitting him in a closet isn't squat.

I heard he suggested to James to go into a dark room because the light was hurting his head due to the concussion. And that Dad Craig is blowing this out of proportion.

Posted by marciano guerrero at 8:24 AM