My Only Anglo Friend: A Thanksgiving Story (From East of Tiffany's) 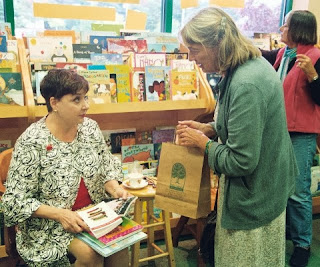 What I really like about the United States of America is the chances one has to go to school and learn many things. Where I come from —a country in Central America that I won’t name, but you can guess— most people are illiterate, but I went all the way through the third grade and I know how to read and add and subtract in both Spanish and English.

But this story is about Mrs. Poumier —not I— and I want to put it in paper right quick while I still have this sadness that is gnawing at my guts and heart. If I write it out I feel I will get it out of my guts, heart, and mind. And get some peace. It is not that I want to cure myself from this melancholy, nor that I want to lessen my guilt, or much less lay blame on someone—no sir, or madam; not at all. It is that I want to pay my respects to Mrs. Poumier, the only Anglo friend I had in this great country that I love as much as I love my own.

In one bit you’ll see why I am so sad: Mrs. Poumier —my sweet dear friend— died a day after Thanksgiving.

For those who might be wondering how a person like me —with low education and low wits— would dare attempt to write a story, I will say that I read a lot. I’ve read somewhere that Cervantes, the author of Don Quijote —the novel I would rescue from a burning building— also went only to the third grade; but he read every piece of paper that came into his hands. So, that is what I do: read everything! Not only I read at Barnes and Noble, Borders, and other bookstores, but I am familiar with every public library in Manhattan. Reading is my passion. And so was Mrs. Poumier’s. In fact that is how we met. In the summer, during my lunch break, as I sat on the stoop of the building where she lived and read One Hundred Years of Solitude, she floored me when she looked at the title, exclaiming with great relish: “The best novel of the 20th century!” And that was the beginning of our friendship.

Being an orphan I was raised by an aunt and my grandmother. Despite the fact that a number of years have gone by since my grandmother—‘abuelita’ Guadalupe— died, her image is so fixed in my brains that I can say she is very much alive in my mind and heart. When my gramma died she left me a medallion with the image of the ‘Virgencita de Guadalupe.’ Superstitious as I am, I feel that as long as I have this sacred token, nothing bad could happen to me. Because Mrs. Poumier resembled —in looks and spirit— my grandmother, I made it a point of befriending her.

For almost two years I’ve been employed in this catering service on 1st Avenue, near Sutton Place. But just because one mentions Sutton Place doesn’t mean that everyone around here is wealthy. No Sir. In fact, Mrs. Poumier, who lived half a block away from One Sutton Place, was poor—poorer than me! To be blunt, her social security check and a small annuity is all she had left, after her son —a big shot stockbroker— lost her portfolio which he had loaded with Internet stocks. That is what she tells me, but I suspect something more sinister—a dishonest son.

Yet in spite of her poverty she never said anything bad about her children. When her portfolio of stocks, bonds, and other securities was managed by Merrill Lynch, she did well and was able to send her son to Harvard Business School, and her daughter to Columbia Law School. Joy and pride would spark in her eyes when she spoke of her children. One day she intimated to me that most of her income went to pay for her rent and that she had very little left for other things, including food. “Not that I am a miser,” she said to me. “It is just that I have to watch every penny.” Yet, she would go meal-less for a day or two so that she could buy the NY Sunday Times. “That’s something I cannot do without—onerous as it might be!” she told me once.

I loved to listen to her. I loved the cadence in her voice; in her voice I found a refined diction; in the diction elegance, an elegance that revealed nobility, and in that nobility the milk of human kindness that more than kindness was love for neighbor. “We girls had to practice good diction,” she told me once. “I went to Mount Holyoke College, you know,” she mentioned once. And I could see in her bright eyes that those might have been the best years of her life.

To reciprocate her goodwill one fine day I gave her my ‘Virgencita de Guadalupe’ medallion. “Nothing bad will happen to you as long as you keep this,” I explained to her. Knowing about Mrs. Poumier’s thin budget, I spoke to Sadeek, the attendant in the candy store two doors down from where I work, and he agreed to sell me the blessed newspaper at half-price. When I told him it was for Mrs. Poumier, he reduced the price to one dollar. And we cooked up a plausible story to tell her. That Sunday when she came to buy the paper Sadeek told her that if she came back at 12 noon, she could buy the paper for only $1, since by then all the customers had picked up their copies and the leftovers could be sold at a lower price. He would set it aside for her. Of course Sadeek asked her to keep mum about that or he would be in trouble with other customers.

Where I work we prepare gourmet food, which we sell for the most outrageous prices. Emiliano, the first cook, fixes this ‘arroz con pollo” —listed in the menu as ‘poulet de la maison du roi’— which we sell for $29 a meal. Go figure. And people from Park Avenue to Sutton place call us for the delicacy which to tell the truth costs less than a dollar to prepare. And if you throw in the labor (minimum wage, no benefits), rent, and overhead, you can add another dollar. Nice business. Nifty profits. The owner of the establishment, an immigrant from Romania, is a good man; very strict, a little humorless, but kind-hearted. Because I speak English better than he does, he lets me handle the customers, the fax, e-mail, and telephone orders. And in the afternoon and evenings I deliver the orders of Emiliano’s exquisite dishes. I don’t want to digress but I must say that Emiliano was born to cook. Our wealthy customers —many of them celebrities I recognize— can’t get enough of his creations. Yet, the man can barely read and write and never uses written recipes!

When any of the machines —ovens, freezers, refrigerators, cash register, coffee and espresso machines, and other objects— breaks down, I fix it. No machine has been invented that I cannot fix. So, the man is happy with me. As a result he only comes a few hours a day, but mainly to balance the receipts for the day and to do some bookkeeping. During my lunch hour I would bring Mrs. Poumier a full meal of the special of the day. Nothing —that is absolutely nothing— in my life gave me more pleasure than to see Mrs. Poumier enjoy her meals—all for free. For her birthday (late August) I swiped a bottle from the cellar of a $40 white wine, and we all —I brought Emiliano and Sadeek with me— had a few glasses. How glorious she looked that day: her delicate features glowed with happiness when we sang the ‘happy birthday’ song.

Once in a while a pang of morals would jolt me and tell me that I might be stealing from my employer; but I would quickly counter the pang with the thought that just fixing one freezer I save the establishment two or three hundred dollars, and if you multiply this for six to eight times a month, you can well see that $2 (cost of the meal) will not set my patron back that much.

One sad day, Mrs. Poumier told me that I should not bring her any more meals because her daughter —a partner in a premier law firm— had come to visit her and told her to stop spending her money in extravagant meals. “I know the prices these people charge,” she had yelled at her. Not only had she yelled at her, but she had threatened to sue us — my catering place— for taking advantage of a poor senile defenseless old woman. The nerve of those people! Furthermore, she had threatened to put her in a home.

Fearful that I might lose my job I told Emiliano not to fix the meals for Mrs. Poumier anymore. For many days I felt despondent and hard as I tried to understand where I had gone wrong—I could not. During the month of October and November I saw Mrs. Poumier around the neighborhood a few times; she looked unkempt, the spark of vivacity in her eyes gone; gone also was the lilt and sweetness of her voice. Knowing how much I cared for the sweet lady, that Friday, the day after Thanksgiving, my friend Plutarco —the doorman— came running to tell me that my good friend had collapsed in the lobby; that the paramedics had pronounced her dead. “This lady is way undernourished—skin and bones!” the paramedic had exclaimed.

As Plutarco gave me the sad news, he also gave me my “Virgencita the Guadalupe’ medallion, which Mrs. Poumier had dropped when she collapsed. Plutarco knows I am a man not given to tears, but that day he saw me cry my eyes out; even Sadeek came out of the store and sat next to me and tried to console me. More than tears for the loss of my good friend, I raged at my suspicion that Mrs. Poumier had not wished to die the day before and spoil Thanksgiving Day for her son and daughter and grandchildren; the two families own houses in Long Island.

Uncared and unloved by both son and daughter, she’s now with my Virgencita de Guadalupe who will give her all the love that she didn’t have here on this harsh concrete and asphalt shore that is Manhattan. Nothing bad will happen to her there—really.

The writing techniques I use in this article are all explained in Mary Duffy's writing manual--an indispensable guide:

Posted by marciano guerrero at 3:12 PM