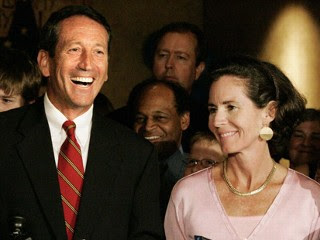 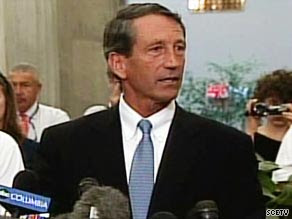 In 1974, Rep. Wilbur D. Mills (D-Ark.), Chairman of the Means and Ways Committee, was involved in the Tidal Basin scandal which splashed him out of Congress. Drunk and driving, he was found cut and bloodied as he tried to rescue a stripper —Fanne Foxe, billed as the “Argentine Firecracker.”— from the cold waters of the basin.
That episode ended Mr. Mills career in the House.

Well, there’s no fool like an old fool—or a man in love. And what is it with Argentinean firecrackers that can be lethal to American politicians? While Fanne Foxe went on to a lucrative career in the night club circuit, "Maria" --Sanford's paramour-- remains a mystery. Ben Laden is more accessible than Maria; or at least we have pictures of him--but not of her.

Jenny Sanford announced today that she will file for divorce from embattled South Carolina Gov. Mark Sanford, who admitted in June to an affair with a longtime lover in Argentina. Jenny Sanford declared:

"I am now filing for divorce," she said in a statement. "This came after many unsuccessful efforts at reconciliation, yet I am still dedicated to keeping the process that lies ahead peaceful for our family."

Sanford moved out of the South Carolina governor's mansion with the couple's four children in August.

"I remain thankful to so many across this state and nation for their words of encouragement and prayers during this difficult time," she added. "Please know the boys and I are doing well and are blessed with the incredible support of friends and family and bolstered by our faith and the unfailing love of our God above."

In a statement, Gov. Sanford accepted responsibility for his actions, which he said drove the couple to "this tragic point."

"While it is not the course I would have hoped for, or would choose, I want to take full responsibility for the moral failure that led us to this tragic point," he said. "Jenny is a great person, and has been a remarkable wife, mother and First Lady. She has been more than gracious these last six months and gone above and beyond in her patience and commitment to put the needs of others in front of her own."

Posted by marciano guerrero at 10:52 AM