Are Epithets and Adjectives the same thing? 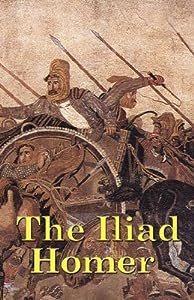 Cover of The Iliad

Although most writers use both terms interchangeably, we must recognize that there is a huge difference between the two: adjectives are constituents of speech, at the same level as nouns, verbs, adverbs, conjunctions, prepositions, pronouns, and interjections.

Epithets are artificial modifiers made up by writers for many reasons, but they aren't constituents parts of speech as the ones mentioned above.

In Homer's Iliad, we read:

When the next day Dawn showed her rosy fingers through the mists, the people gathered around the pyre of Hector. First they quenched the flames with wine whetever the fire had burnt; then his brothers and his comrades gathered his white bones, with hot tears rolling down their cheeks. They placed the bones in a golden casket, and wrapped it in soft purple cloth; this they laid in a hollow space and and built it over with large stones.

But when we read: "Dawn showed her rosy fingers through the mists," we are reading an epithet. Doubtless the subject is Dawn, and the act of showing "her rosy fingers through the mists," is more than a modification and description; it extends over a whole scene by giving the reader thorough knowledge not only of the subject but by casting light on the entire scene. Dawn brings light, it replaces the pyre, and the flames that were quenched. In her light we can visualize the scene in splendid colors: white, golden, and purple.

But Homer was Homer. And today we have no Homers.

Today we have reduced epithets to the status of simple modifiers. Some epithets have become part of the subject as in Richard the Lionhearted and Alexander the Great. Others are mainly ornamental just as adjectives are.

But artistry comes into the text when writers consciously employ epithets consistently throughout their work. Let's see how Jane Austen (in Pride and Prejudice) uses Mrs. Bennet's 'nerves' not only in different scenes, but throughout the entire book, so that at the end the lady's nerves get into our own nerves:

'Mr Bennet, how can you abuse your own children in such a way? You have no compassion on my poor nerves.'
'You mistake me, my dear, I have a high respect for your nerves. They are my old friends.'

From the above dialogue, we can see that epithets can be powerful tools of sarcasm and insult.

Posted by marciano guerrero at 11:40 PM