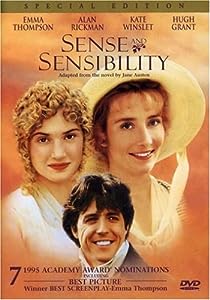 Cover of Sense & Sensibility (Special Edition)
In Jane Austen’s novel Pride and Prejudice, Mary --one of the Bennet sisters and a pedant—repeats words and opinions she draw from a book on rhetoric much in vogue then: Hugh Blair’s Lectures on Rhetoric. Which shows that Jane Austen was a student of rhetoric.

In Sense and Sensibility we find some rhetorical figures:
Hyperbole is rhetorical exaggeration: “Mrs. Jennings was a widow, with an ample jointure. She had only two daughters, both of whom she had lived to see married, and she had now therefore nothing to do but to marry all the rest of the world.”

With one hyperbolic statement, Mrs. Jennings has been characterized as an idle busybody.

Oxymoron is a logical contradiction: “The sort of desperate calmness with which this was said…” And: “…unsettle the mind of Marianne and ruin at least for a time the fair prospect of busy tranquility.”

Often an oxymoron is the result of careless writing, but in the case of Jane Austen, no one can accuse her of being a careless writer—quite the contrary. By using this rhetorical figure she achieves economy of words.

Zeugma: According to Mary Duffy’s textbook Toolbox for Writers, zeugma is a group of words governed by one dominant word; a rhetorical figure which is often used to inject humor. In Sense and Sensibility we read: “…in spite of its owner having once been within some thousand pounds of being obliged to sell out at a loss, nothing gave any symptom of that indigence which he had tried to infer from it; —no poverty of any kind, except conversation, appeared.”

In the above passage, the dominant word is poverty, to which the writer attaches the secondary meaning: dull conversation.

Posted by marciano guerrero at 11:59 AM