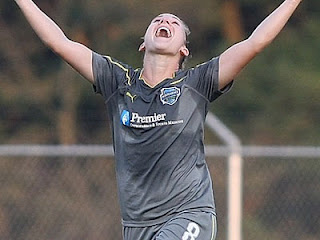 Faster than Superman, Quicker than the Road Runner, unstoppable soccer princess Amy Rodriguez is a seasoned striker--a natural forward that can score. Though she may not have the dribbling skills of Leo Messi, she surely surpasses the speed and strength of Cristiano Ronaldo.

Every Sunday evening the regulars and young aficionados crowd the bars along 1st Avenue and the Sixties, to watch WPS soccer. When goals are scored, the crowds roar and people over spill to to sidewalks to celebrate. And when Amy Rodriguez scores the roar may be heard all the way to the canyons of the financial district and Wall Street.

While Marta --the Brazilian Messi-- is admired by New Yorkers, Amy Rodriguez is revered by the fans in the Big Apple. I don't know about other states, but in New York City, Manhattan, people are dazzled by her performances.

"She is brilliant right now, and everybody knows she is hot and her efficiency right now is unbelievable," Independence coach Paul Riley said. And not only is this statement true but just the kind of energizer a young striker needs. What a difference from the Boston Breakers' coach DiCiccio who almost destroyed Amy's career by benching her almost the entire past season.

A Forward with the speed that Amy displays is unstoppable. No defender can stick to her for she has moves that the quickest eye can miss. With the ball and without it, she's always a menace to the opposing team.

Posted by marciano guerrero at 9:28 AM