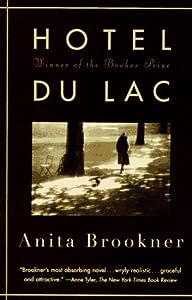 No better way to start a novel --Hotel du Lac-- than using color, but grey? Surely, that color is a dead giveaway that the novel will be about the grayness of life: “From the window all that could be seen was a receding area of grey.”
Except for the abuse of the use of the preposition ‘as’ in opening sentences, the prose is even, rhythmic, and in general well written; though some mannerisms —which should be set aside in benefit of the story— mar the narration. And it had to be well written since the theme of the book is about the melancholy life of an unhappy writer and her writing, unhappy both in her ruminations of life and in her loveless life.
To expect that having an affair is a way of gaining sympathy for the protagonist is disingenuous. But that is what the novel is about. Edith Hope, the writer of romantic fiction, turns out to be a “grey” melancholy character that is inaptly surnamed Hope, for she has none.
With the Hotel du Lac (in Switzerland) as backdrop, Edith Hope observes the characters that populate the hotel in the after season period. In meeting an assortment of pathetic beings she finds little rest and solace in their companionship, for they all are pathetic souls; quite the contrary, they increase her own loneliness.
What gives the surreal tension to the writing is the narrator’s obsession with the color grey in its different variations: oyster-coloured satin, grey solitude, the man in grey, oyster-coloured eyes, veal-coloured room, grey mist, measureless grey expanse, and other similar descriptions.
In the end, she writes a message announcing her return to London: “Coming home.” But on second thought, and being a writer who respects words and veracity, she rewrites: “Returning.”
Anita Brookner has been described as an heir of Jane Austen, and that she writes in the same style. Without a doubt Ms. Brookner is a fine writer, but the claims to resemblance to Jane Austen are not only exaggerated, but also ill-founded: Jane Austen would never have written about foreign pathetic characters as observed by a hopeless character.

The only writing guide I consult to write my articles is Mary Duffy' s Toolbox for Writers.

Posted by marciano guerrero at 11:28 AM