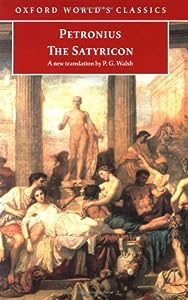 Cover of The Satyricon (Oxford World's Classics)
How to become a writer
Notice the sentence openers from "Dinner with Trimalchio":

With the weight off his bladder, he demanded water for his hand, splashed a few drops on his fingers and wiped them on a boy's head.

After this a picture of how he learned accounting, and finally how he became a steward.

Beneath this same inscription a fixture with twin lamps dangled from the ceiling and two notices, one on each door-post.

Petronius: Roman satirist (died A.D. 66). The Roman satirist Gaius Petronius Arbiter —nicknamed "Arbiter of Elegance"— was not only a writer but also a close friend of the Emperor Nero. Because the emperor thought of himself as a connoisseur of the arts, Petronius —a true intellectual— gained much favor from Nero by fawning around him.
But like many other high politicians, he fell victim of a conspiracy, causing Nero to force him to commit suicide. Yet, knowing of his impending death, Petronius wrote a scathing satire against Nero, which he promptly dispatch to him.
In his novel Satyricon, Petronius depicts the scandalous lives of Romans: wild parties, bacchanalias, orgies, and degenerate habits. Only fragments of the novel remain, but what remains in sufficient for today’s readers to get the full flavor of Petronius’ intellectual reach and style.
Petronius anticipated what later was to develop as a separate genre: the picaresque novel. Satyricon stitches together the adventures of three picaros —Encolpius, Ascyltus, and Giton who meander aimlessly through Italy and whose main concern is to stay alive, eking out a living by their own wits. Petronius describes their love adventures, troubles with the law, their quarrels with outraged citizens, and their escapes.
A lively scene —the Ban­quet of Trimalchio— depicts with gross exaggeration one of wealthy townsman Trimalchio’s parties. Scott Fitzgerald admitted that he had in mind Trimalchio’s banquets when he wrote of Jay Gatsby’s parties in Long Island. Of low birth and little or no education, Trimalchio strives to gain respect through the accumulation of wealth. And after he becomes rich he pursues his social climbing by mean of ostentatious parties that rather than affairs of refinement turn out to be affairs of ridicule.
Since Petronius was familiar with the aristocracy, he was quite accurate in painting Trimalchio’s as a vulgar copycat of good manners and learning. Petronius wrote the novel in Latin, but there are many fine translations into English which give a fine rendition of what life in those years was like.
To become a writer I write essays every day. Since English is my second language, in writing essays I consult Mary Duffy's Sentence Openers. When I write fiction --or fiction writing of novels and short stories-- I consult Toolbox for Writers.

Posted by marciano guerrero at 10:56 AM