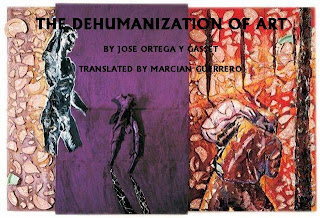 CHAPTER1 - UNPOPULARITY OF THE NEW ART

Among the many bright, though inadequately developed, ideas of the eminent French philosopher J. M. Guyau we must count his intention to study art from a sociological point of view. The subject may suddenly appear to be a waste.

Studying art from the side of its social effects looks very much like putting the cart before the horse, or studying a man by his shadow. The social effects of art are, at first impression, things so extrinsic, so remote from the aesthetic essence that it is impossible to see how, starting from them, we can ever hope to penetrate into the inner core of styles. Certainly, Guyau failed to make the best of his ingenious intention. His short life and tragic rushing toward death prevented him from calming down his insights, from setting aside what is obvious and trodden, in order to have insisted in what is more substantial and recondite. We may say that of his book Art from a Sociological Point of View only the title exists; the rest is yet to be written.

The fruitfulness of a sociology of art was revealed to me unexpectedly when, a few years ago, it occurred to me to write a piece on the new epoch in music which begins with Debussy . My task was to define with great clarity the difference of style between the new music and traditional music.

The problem was strictly aesthetic, and yet it turned out that the shortest way of tackling it started from a sociological fact: the unpopularity of the new music.

I will now speak more in general and consider all the arts in Europe that still have some vigor; that is the new music, the new painting, the new poetry, and the new theater. It is truly surprising and mysterious to see the compact unity that every historical epoch maintains in all its various manifestations. An identical inspiration, one same biological style throbs even in the more diverse arts. Unaware of it, the young musician strives to realize with sounds the exact same aesthetic values as his contemporary colleagues ¬the poet, the painter, and the playwright. And this identity of artistic purpose had to produce, by force, identical sociological consequences.

In fact, the unpopularity of the new music responds to an unpopularity of similar order in the other Muses. All the new art is unpopular, and not because of accident and chance, but by virtue of its essential fate.

It might be said that every newcomer among styles passes through a stage of infectious disease. The battle of Hernani comes to mind, and all the other skirmishes connected with the advent of Romanticism. However, the unpopularity of present-day art is of a very different mien. Let’s distinguish between what is not pop¬ular and what is unpopular. The innovative style takes some time in winning popularity; it is not popular, but it is not unpopular either. The break-through of Romanticism often cited as an example was, as a sociological phenomenon, exactly the opposite of the present situation of art. Romanticism conquered "the people" in no time, to whom the old classical art had never appealed.

The enemy with whom Romanticism had to fight it out was precisely a select and stale minority attached to the classical forms of the "ancient regime" in poetry. The romantic works were the first —from the invention of printing— to enjoy large editions. Romanticism was the prototype of a popular style. As the first-born of democracy, it was coddled by the masses.

The new art, on the other hand, will always have the masses against it. It is essentially unpopular; moreover, it is anti-popular. Any work parented by it automatically produces a curious sociological effect on the general public. It divides the public into two groups: one very small, formed by those who are favorably inclined towards it; another very large, uncountable—but hostile to it. (Let’s ignore the equivocal fauna of the snobs). Thus the work of art acts like a social agent that creates two opposing groups, sifting and selecting from the shapeless throng two different castes of men.

And what are the differentiating principle that creates these two castes?

Every work of art arouses differences of opinion. Some like it some don't; some like it less, some like it more. Such disagreements have no organic character; they don’t follow a principle. Our own personal fate will place us hither of tither. But in the case of the new art the split occurs in a deeper plane than that on which differences of personal taste move. It is not that the majority does not like the art of the young and the minority likes it. What happens is that the majority, the masses, do not understand it. The old bigwigs who were present at the performance of Hernani understood Victor Hugo's play very well; precisely because they understood it they disliked it. Faithful to a determined aesthetic sensibility, they felt disgust at the new artistic values that the romantic artist proposed to them.

In my judgment, the characteristic feature of the new art is, "from a sociological point of view," that it divides the public into the two classes: those who understand it and those who do not. This implies that one group possesses an organ of comprehension denied to the other; that they are two different varieties of the human species. The new art, as we have seen, isn’t for everyone, as was Romanticism, but is only addressed to a specially gifted minority. Hence the indignation it arouses in the masses. When a man dislikes a work of art, but understands it, he feels superior to it; and there is no reason for indignation. But when his dislike for the work of art is caused by his failure to understand, he feels somewhat humiliated and left with a dark sense of inferiority which he must compensate by indignant self-assertion.

The new art, by its mere presence, compels the average citizen to realize that he is just this: a good bourgeois, a being incapable of receiving the sacrament of art, blind and deaf to pure beauty. But such a thing cannot be done without impunity after a hundred years of total adulation for the masses and apotheosis of the people. Accustomed to ruling supreme, the masses felt offended in its “rights of man” by the new art, which is the art of privilege, of nobility and of nerve, of instinctive aristocracy. Whenever the new Muses present themselves, the masses kick.

For a century and a half “the people,” the masses, have claimed to be the whole of society. Stravinsky’s music or Pirandello's drama have the sociological effect of compelling the people to recognize itself for what it is: only “a people,” mere component among others of the social structure, inert matter of the historical process, a secondary factor of the spiritual cosmos. On the other hand, the new art also helps the elite to recognize themselves and one another in the drab multitude of society and to learn their mission which consists in being few and to have to fight against the many.

A time must come in which society, from politics to art, reorganizes itself, as it should be, into two orders or ranks: the illustrious and the vulgar. All the indispositions of Europe will overflow and find cure in this new and saving excision. That chaotic, shapeless, and undifferentiated state without regent discipline and social structure in which Europe has lived these hundred and fifty years cannot go on. Behind all contemporary life lurks a profound and irritating injustice: the assumption that men are actually equal. Each step we take among men so obviously reveals the opposite that each step results in a painful stub.

If this subject were broached in politics, the passions aroused would run so high that it may not be the time to make oneself under¬stood. Fortunately, the unity of historical spirit alluded allows us to point out serenely and with perfect clarity in the germinating art of our time the same symptoms and signals of a moral reform that in politics present themselves obscured by low pas-sions.

The evangelist preached: "Nolite fieri,sicut equus et mulus quibus non est intellectus." Do not act like horses and mules that lack understanding. The masses kick and do not understand. Let’s try to do the opposite. Let’s extract from the new art its essential principle and then we shall see in what profound sense this modern art unpopular

NOTE: my fresh translation of Ortega y Gasset's The Dehumanization of Art is now available in amazon.com KINDLE for $5.
Posted by marciano guerrero at 11:27 AM