Read Maupassant's "The Necklace," available in KINDLE amazon.com $1.99 If you don't own a KINDLE at this time you may download "Maupassant's The Collar" into your computer for only $0.99. Use the Paypal button below: 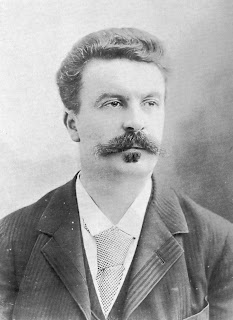 With his short story "The Diamond Necklace," Guy de Maupassant confronts the basic difference between apparent value and true value—appearance versus reality. Or, as Oscar Wilde once remarked in his novel The Portrait of Dorian Gray: “Nowadays people know the price of everything, and the value of nothing.” Was the Ball a Happy Night or a Woeful Nightmare?

Mathilde Loisel, the middle-class wife of an insignificant clerk, is the protagonist of the story: she dreams of a life of luxury in which she sees herself as being surrounded by comfort, objets d'art, eating fine and exotic food, wearing elegant clothing, and much of what comprises her idea of an affluent life in rich society might be.

Right from the outset the narrator tells that though born to a low family she feels as if she was destined for better things, and all this because of her beauty. Her problems begin to develop when her husband brings home a most coveted ball invitation from the Ministry of education where he works. At the ball high functionaries and people of distinction will be in attendance.

The evening of the ball, clad in a brand new dress and wearing a borrowed necklace from a rich friend, she dazzles the guests —to include the Minister himself— and dances with giddy abandonment, intoxicated by her success. Never had she ever experienced the hour of happiness as she did that night. Or as William Wordsworth said in his poem “Ode to Immortality:” it was the “hour of splendor in the grass, the glory of the flower.”

After the ball, when she and her husband get ready to leave, an abrupt jolt of reality hits her as she puts on her shabby coat; a secondary tremor brings her back to her ordinary life as they take a low taxi cab; those dilapidated cabs that because of their shabby look only come out at night. Her joyous triumphal night turns into a woeful nightmare when she realizes that she has lost the borrowed diamond necklace!

The Price of Everything and the Value of Nothing Mathilde's borrows the diamond necklace from her rich friend —Mme. Forestier— because she imagines that diamonds are the emblem of wealth and success. But she knows nothing about them. Her limited life experience prevents her seeing what is real and what is not. Overwhelmed by the appearance of the impressive velvet box and the shiny stones, she chooses the fated diamond necklace. Her choice satisfies her wild imagination. Both husband and wife know the price of things, yet nothing of their value. To replace the lost diamond necklace they mortgage ten years of their life —during which they lived in abject poverty— in order to pay for the cost of the necklace—thirty-six thousand francs.

Can the price the Loisels pay for one night of Mathilde’s happiness be fair? More than a moral judgment, the answer seems to be one of distributive justice: punishment for an attempt at social climbing. That seems to be the lesson. Conclusion From the text we know that the husband is inconsequential, that Mathilde is the protagonist and the heroine —or anti-heroine, if we look at her failings— and catalyst of what happens in her world. But in assessing blame one should not make Mathilde the scapegoat of the story. Plenty of blame is there to go around! The mediocre, unambitious, and weak husband isn’t free from guilt. Likewise, Mathilde’s rich friend, Mme. Forestier, should also bear responsibility for not admitting that she owns fake jewelry; and what is even more offensive to the readers, that she doesn’t tell Mathilde the cheap price of the imitation necklace.

In an ideal and fair world, Mathilde should have asked —right there and then— for a restitution of thirty-five thousand five-hundred francs—the difference between the price of the fake and true value of the real diamond necklace. But that is out of the realm of the text.

Yet, to a large degree, it is the stratification of society, the social classes, what causes dissatisfaction in people. Even the Minister and the high functionaries are bamboozled and dazzled by the superficial beauty of an imaginative common wife clad in a new dress and a fake diamond necklace.

Read Maupassant's "The Necklace" now available in KINDLE amazon.com $1.99 If you don't own a KINDLE at this time you may download "Maupassant's The Collar" into your computer for only $0.99. Use the Paypal button below:

Posted by marciano guerrero at 2:31 PM