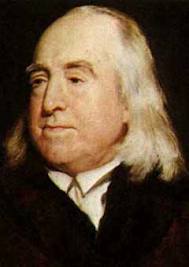 The philosopher and jurist Jeremy Bentham (1748-1832) was born in London, on 15 February 1748; the son of a successful London attorney. By many accounts he was a child prodigy: while still a toddler he was discovered sitting at his father's desk reading a multi-volume history of England, and he began to study Latin at the age of three.
At twelve, he was sent to Queen's College Oxford, receiving his bachelor's degree three years later and his master's degree at twenty-one.
Having inherited a fortune he was relieved of making a living by practicing law, dedicating himself to a life-long pursuit of learning in many fields, and writing.

Bentham's affinity for political theory came from his logical method, and from his practical application of the doctrine of Utilitarianism.
Bentham’s explained his approach in book Introduc­tion to the Principles of Morals and Legislation (1780). He related the principle of utilitarianism —`the greatest happiness of the greatest number'— to actual legislation and legal administration.
Bentham also wrote and applied his principles of utilitarianism to the topic of ‘legal sovereignty,’ which became the legal bases of nineteenth-century utilitarian jurists.
In his Fragment on Government he gave a general definition of "political society," summarizing his critical and constructive political ideas. The full subtitle explains clearly that the book was an attack of Blackstone’s Commentaries: Being an Examination of what is delivered, on the Subject of Government in General, in the Introduction to Sir William Blackstone's Commentaries; with a Preface in which is given a Critique on the Work at large.

In 1823 Bentham helped found the West­minster Review, which became the leading journal of political and religious radicalism. Much of his time he invested in codifying the common law, and improving the processes of legislation, and reforming prison methods. He even designed what was to him a practical and humane prison—the Panopticon.

More than a missionary, Bentham was a visionary, for his gaze reached centuries ahead of his own time: he advocated universal suffrage and the decriminalization of homosexuality.
Throughout his life he was an advocate of public disclosure: "In the darkness of secrecy, sinister interest and evil in every shape, have full swing. Only in proportion as publicity has place can any of the checks, applicable to judicial injustice, operate. Where there is no publicity there is no justice."
But his lasting contribution to mankind is in the field of ethics.
"Nature has placed mankind under the governance of two sovereign masters, pain and pleasure. It is for them alone to point out what we ought to do, as well as to determine what we shall do. On the one hand the standard of right and wrong, on the other the chain of causes and effects, are fastened to their throne. They govern us in all we do, in all we say, in all we think: every effort we can make to throw off our subjection, will serve but to demonstrate and confirm it. In words a man may pretend to abjure their empire: but in reality he will remain. subject to it all the while. The principle of utility recognizes this subjection, and assumes it for the foundation of that system, the object of which is to rear the fabric of felicity by the hands of reason and of law. Systems which attempt to question it, deal in sounds instead of sense, in caprice instead of reason, in darkness instead of light."
The prin­ciple of utility, or of the greatest happiness of the greatest number, was much debated in his time and in the 19th century, in which formidable opponents not only deconstructed, but also demolished the premises on which it was based.

Posted by marciano guerrero at 11:33 AM