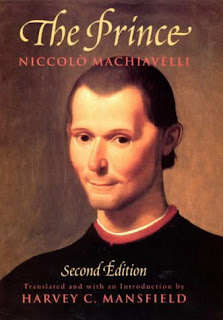 Niccolo di Bernardo dei Machiavelli was born in the city-state of Florence. He was in the public service of Florence since he was 30 years old until his death, with a nine-year gap during which he was in exile. Arrested for conspiracy in 1513, and put to the torture, he denied knowledge of such alleged conspiracy. Although pardoned, he was obliged to retire from public life and devoted himself to literature.
He was an experienced political envoy, and was sent in many missions, including one to the Emperor Maximilian, and four to France. Since he was an accomplished writer, he completed a political treatise of his experience in foreign countries: Affairs of France and Germany.
In 1519 that he was commissioned by Leo X to draw up his report on a reform of the state of Florence. From 1521 to 1525 he served the diplomatic corps and as historiographer. After the defeat of the French at Pavia (1525), he saw Italy surrender to the advancing forces of the Emperor Charles V.
In May 1527 the Medici lost power and the Florentines proclaimed the republic, Already in ill health, and disappointed that he played no role in such important event, he died on June 22.

It was during his banishment that he wrote his two important political works—the Prince, the Discourses on the First Ten Books of Livy.
Both books dealt with the theory of rising and declining states, and how to maintain power. Roman Republic. While the Prince provides a method for holding on to power by all possible means, the Discourses is concerned with absolute monarchical government.

Not only was Machiavelli a writer, but a writer-rhetorician; a master of all the figures of thought and speech as outlined and explained by ancient writers from Aristotle, Seneca, and Cicero, to Quintilian and St. Augustine.
Besides his letters and state papers, Machiavelli wrote histories: a Life of Castruccio Castrancani (unfinished) and History of the Affairs of Lucca. His literary works include an imitation of the Golden Ass of Apuleius, an essay on the Italian language, the play Mandragola, and several minor compositions. He also wrote Seven Books on the Art of War.

Machiavelli’s Bridge to Immortality: The Prince

More than from any of his other works —which were numerous— Machiavelli's lasting fame derives from his brief book: the Prince.
Machiavelli is often called the “father of modern political science.”
By “modern” it is usually meant that because a book’s conclusions are sustained by references to history and contemporary politics and not by citation of authority or by derivation from theological dogma and philosophi­cal tradition. In other words, Machiavelli freed political thinking from the tethers of previous thinkers such as Aristotle, Plato, St. Augustine, and Thomas Aquinas.
The Prince advocates perpetual political dominion by all possible means regardless of ethical and moral principles. This view is captures in the axiom: “the ends justifies the means”
What is right and wrong, public welfare, religious creeds, commerce, property rights, and human rights are all derived from the prince’s —or autocrat’s— ability to remain in power. The autocrat was the state. The model for such unscrupulous despot was Cesar Borgia, a skillful and infamous tyrant, who through cruelty and fraud managed to hold on to power..
He dedicated the work to Lorenzo de' Medici (grandson of Lorenzo the Magnificent), who became head of the Floren­tine government in 1516. After being recalled from exile, Machiavelli was employed as of adviser and diplo­matic representative of the Medici rulers in Florence and Rome.
Famous Quotes from the Prince:

“the ends justifies the means”

“It is better to be feared than loved, if you cannot be both.”

“Never was anything great achieved without danger.”
“Men are driven by two two principal impulses, either by love or by fear.”
“Men are so simple of mind, and so much dominated by their immediate needs, that a deceitful man will always find plenty who are ready to be deceived.”
“The lion cannot protect himself from traps, and the fox cannot defend himself from wolves. One must therefore be a fox to recognize traps, and a lion to frighten wolves.”

Posted by marciano guerrero at 10:11 AM