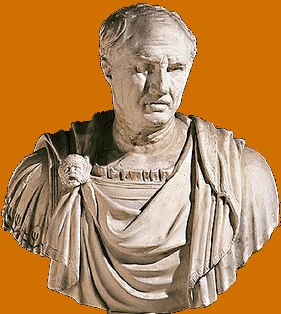 Marcus Tullius Cicero (106 – 43 B.C.) was a Roman philosopher, statesman, lawyer, orator, political theorist, and consul, descendant of a wealthy municipal family of the equestrian order, and is widely considered one of Rome's greatest orators and prose stylists.

According to Plutarch, Cicero was an extremely talented student, whose learning attracted attention from Rome, affording him the opportunity to study Roman law under Quintus Mucius Scaevola, founder of the scientific study of Roman law.

His writings are in various fields-rhetoric, oratory, ethics and political philosophy. In his theoretical writings he not only elucidated the ideas of the classical and Stoic writers of Greece, but also showed how those ideas could be practically applied in Rome.
Many of his letters and speeches have been published as books. But his legacy remains in Rhetoric & Philosophy

His Bridge to Immortality

Cicero was the only native Roman who wrote extensively on political theory, though such writings contain no original contribution to political thought.
Considered the greatest of Roman prose writers, he was also one of the most successful and powerful lawyers of his day, as well as a fierce political orator.
As a politician he held many of the most impor­tant public offices in Rome, was an active leader in the bitter party politics, spending several years in political exile, and was ultimately killed.
Under the influence of the Greek Stoics, Roman writers —including Cicero— wove principles of "natural law" into the principles of Roman juris­prudence, shaping fundamental ideas for later political theory as universal social and political truths. Cicero had a definite obsession with the forming of a “perfect state.”
He borrowed from Polybius, as well as from Plato and Aristotle, the idea that a mixed constitution was the best form for governing states. In the Laws he proposed ideas for rectifying and completing the mixed constitution of Rome, setting forth the Stoic doctrine of natural law. From ‘natural law’ he drew striking conclusions concerning the ethical aims of the state, the ultimate supremacy of the people in a true political community, and its essential legal equality.
Cicero’s juristic and socio-ethical ideas contributed to the evolution of political ideas. .

A happy life consists in tranquility of mind.

A mind without instruction can no more bear fruit than can a field, however fertile, without cultivation.

Freedom is a possession of inestimable value.

He only employs his passion who can make no use of his reason.

He removes the greatest ornament of friendship, who takes away from it respect.

I will go further, and assert that nature without culture can often do more to deserve praise than culture without nature.

If you aspire to the highest place, it is no disgrace to stop at the second, or even the third, place.

In men of the highest character and noblest genius there is to be found an insatiable desire for honour, command, power, and glory.
In so far as the mind is stronger than the body, so are the ills contracted by the mind more severe than those contracted by the body.

It is a great thing to know our vices.

It is a true saying that "One falsehood leads easily to another".

Live as brave men; and if fortune is adverse, front its blows with brave hearts.

Posted by marciano guerrero at 1:22 AM