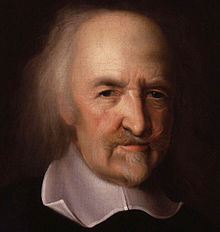 Thomas Hobbes was born in London on April 5, 1588. Allegedly, he was born prematurely when his mother learned of the impending invasion of the Spanish Armada. Little is known of his childhood; his mother’s name is unknown. His father, Thomas Hobbes, was the vicar of Westport. Of Thomas Hobbes senior, it is well known that he abandoned his three children as he fled his parish —Westport— for fear of prosecution due to a violent altercation with another clergyman.

A graduate of Oxford, he was employed as tutor in the family of the Earl of Devonshire. He was also engaged as tutor in mathematics to the Prince of Wales (afterwards Charles II), when the family lived in exile in France.
At Oxford Hobbes fell under the influence of Italian physicist, astronomer, and mathematician Galileo Galilei (1564-1642), studying mathematics and philosophy. Galileo’s new scientific theory on the laws of motion and physical nature gave Hobbes the platform on which he built his own synthetic philosophy about man, society, and the physical world.

Hobbes wrote several versions of his political philosophy:
The Elements of Law, Natural and Politic (also under the titles Human Nature and De Corpore Politico) published in 1650.
De Cive (1642) published in English as Philosophical Rudiments Concerning Government and Society in 1651.
The Leviathan published in 1651, and its Latin revision in 1668.
History of the English Civil War, Behemoth (published 1679), De Corpore (1655), De Homine (1658).
Dialogue Between a Philosopher and a Student of the Common Laws of England (1681).
The Questions Concerning Liberty, Necessity, and Chance (1656).

Hobbes also contributed to a diverse array of other fields, including history, geometry, the physics of gases, theology, ethics, and general philosophy.

The Leviathan, or the Matter, Form and Power of a Commonwealth, Ecclesiastical and Civil.1 (1651) is considered Hobbes’ magnum opus.
In the first part of Leviathan, Hobbes deals with his conception of social philosophy, which is basically hedonistic, materialistic, and deterministic. In the “state of nature” —a pre-political stage— man is untethered to do as he pleases—totally unrestrained and without a government. Hence, man’s life was "solitary, poor, nasty, brutish, and short."

From this stage Hobbes moves on to a second stage in which he discusses the ideas of a social contract and a commonwealth. The third and fourth parts of the Leviathan deal with theological and ecclesiastical subjects.

The third step in the three-fold design just indicated was ac­complished before the other two, and is embodied in the work which appeared in

Hobbes referred to the natural state of mankind (before a central government) as: "solitary, poor, nasty, brutish, and short."

The right of nature... is the liberty each man hath to use his own power, as he will himself, for the preservation of his own nature; that is to say, of his own life.

Curiosity is the lust of the mind.

It is not wisdom but Authority that makes a law.

In the state of nature profit is the measure of right.

The secret thoughts of a man run over all things, holy, profane, clean, obscene, grave, and light, without shame or blame.

There is no such thing as perpetual tranquility of mind while we live here; because life itself is but motion, and can never be without desire, nor without fear, no more than without sense.

Force and fraud are in war the two cardinal virtues.

Posted by marciano guerrero at 10:08 AM