A new translation in contemporary American English is available in KINDLE amazon.com - Or if you have no KINDLE at this time you may download Notes from Underground into your computer for only $0.99. Use the Paypal button below: 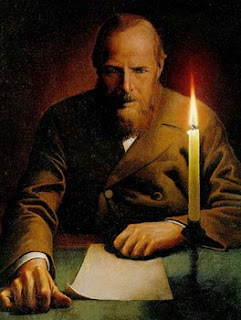 Fyodor Dostoevsky(1821 – 1881) was a prolific Russian writer of  novels, short stories and essays. His literary works delve into the depths of human psychology.

Although his trilogy of lengthy novels: Crime and Punishment, The Idiot and The Brothers Karamazov may be considered by many critics his maximum literary achievement, his novelette Notes from Underground is more widely read than the lengthy novels. But its merit ultimately lies in the tremendous influence that it has exerted on many writers: Nietzsche, Freud, Kafka, Bellow, Philip Roth, and even Woody Allen.

From the outset the reader is beset by the ranting (writings) of a retired mid-level government bureaucrat. An inheritance has allowed him to quit his most despised job. So that at age forty he finds himself living with a neurotic servant in what he calls “a mousehole.”
The word underground is confusing, causing many readers to think that the narrator lives in some underground tenement. Notes from Underground may be better translated as “notes from under the floorboards.”

On the surface the extended diatribe of a delusional narrator may seem a concatenation of insults, of vulgarities, and commonplaces; the subterranean reality is that the text contains sharp ideas of criticism against progress: the ideologies of utilitarianism, German idealism, socialism, evolution, the greatest good for the greatest number, and Schiller’s “the good and the beautiful.”

The underground man in today’s language may be described a “bi-polar” character. He taunts his readers, apologizes, and rages against himself, getting wild, only to collapse again and again. Should he be taken seriously, given his avowals and disavowals, paradoxes, and contradictions?  If we could deconstruct fairly the Underground man’s aversion for the Crystal Palace (built in 1851 in London), we can get close to seeing how his mind works. To him, the Crystal Palace is a metaphor for science, rationality, positivism, mathematics, and industrial capitalism. All of which in the end makes man no less than a predictable zombie—so wrong a conclusion. To the Underground man, man is unfathomable: God’s mystery.

The novelette contains two quite different parts. In the first part the underground man introduces himself, complaining and railing against progress and anything that is scientific. The second part is a flashback to when he was twenty-four years old, recounting some bizarre incidents from his social life: deep resentment against an officer, and against fellow schoolmates which culminate in a disastrous dinner party, and his meeting of Liza—the proverbial lonely prostitute with the golden heart.

In the end one is left pondering whether there’s love and redemption in the human heart—or only perversion.

Table of Contents
I — Underground
1 — A Wicked and Repulsive Narrator
2 — Heightened Consciousness
3 — The Laws of Nature
4 — The Highest Sensuality
5 — Consciousness and Inertia
6 — The Beautiful and the Sublime
7 — Man’s Profits: the Omitted ones
8 — Reason vs Independent Desire (Choice)
9 — Suffering and Well-Being
10 — A Crystal Palace and a Chicken Coop
11 — The Final Result: Do Nothing or Write

II. A Propos of the Wet Snow
I — The Underground Man at 24
II — The Sublime and the Beautiful
III — The Odd Man at a Classmates’ Party
IV — Throwing a Wet Blanket at the Party
V — A Visit to a House of Ill Repute
VI — Love is God’s Mystery: Liza
VII — A Diatribe for Redemption
VIII — Facing Apollon While Thinking of Liza
IX — Liza Arrives!
X — Such an insult is after all purification.

A new translation in contemporary American English is available in KINDLE amazon.com - Or if you have no KINDLE at this time you may download Notes from Underground into your computer for only $0.99. Use the Paypal button below:

Posted by marciano guerrero at 12:35 AM No comments:

Jose Ortega's The Dehumanization of Art

If you don't own a Kindle or Nook at present, you may download the ebook to your computer--for only $0.99

Posted by marciano guerrero at 10:12 PM No comments:

East of Tiffany's contains 13 short stories: 3 of them are reviewed.

Dog Heaven
Dog Heaven is not only one of the best short stories I have ever read in my life but also it is an emotional story that truly touches my heart. I for one am a dog lover myself raising a Mastiff for about five years and I can truly say that I can relate to how Pepino had a great impact on his owners. The same instinct that Pepino had in that he was extremely smart and comforting is what I can say proudly I have with my dog. The message that I learned from reading this story is that sometimes you have to go with your instincts to get ahead in life, the same instincts that Pepino conveyed in his everyday actions. In life, we are face with hardships but life continues. We need to take a bad situation and use it as an impulse to better ourselves. I would recommend this story to anyone because it is more than story about a man's best friend; it shows you how challenges can make someone a stronger person.

My Only Anglo Friend
I like this short story because it shows a bond between a young orphan man and a dear friend, Mrs. Poumier who reminded him of his lost grandmother. Mrs. Poumier was a writer and this young man was into books so much that he would go into bookstores and different libraries to read as much as he could. As much as he loved to read, he began to develop a passion for writing. Meeting this woman truly made an impact in this young man's life to begin writing and she would correct some of his stories as well as giving him some pointers on how to becoming an excellent writer. I learned from the story that sometimes you need to lend a helping hand to those who are facing some bad luck. This story I would recommend for anyone one to read because it shows how the this woman gave this young man the impulse to continue to write. A passion to read and having a kind heart resulted in this young man developing the skills to becoming a great writer.

Luke, Postmodern Man
This story is indeed one of my favorites because it shows how an intelligent man who is great at what he does for a living deals with the hardships of finding true love after being dumped by a woman whom he cared for so much even in dealing with her struggles through breast cancer. This story involves a love triangle where a woman, named Erica who leaves her boyfriend Luke to become more independent after recovering from the cancer and yet she leaves him without any valid reason. This makes Luke fall into a depression where he is losing his hair and is thinking about taking his own life until he meets another woman named Melissa whom he has become very fond of. I learned from this story that you never close the doors on people who really care about you because you never know when that person is the only one that can really help you when you have hit rock bottom. This is truly a story that gives you a sense of sadness, happiness, and more than anything, it shows the true meaning about what it is to be a true friend.

Posted by marciano guerrero at 8:31 AM No comments:


Plato (427-347 BC)
INTRODUCTION
Plato’s life is not well known much less in great detail. All we know is that he was born to an aristocratic Athenian family, spending most of his life in a time of political unrest and political degeneration in Athens. The Peloponnesian War, the wars in northern Greece, the beginning of the Macedonian invasion, and the trial of Socrates took place during his life.


Socrates —the loquacious Athenian philosopher— was Plato’s teacher, close allied, and friend.
During the last fifty years of his life Plato taught and lectured at the Academy —a pleasure-grove— near Athens. The school, once created, was perpetuated by his disciples as a permanent philosophical school for lectures, study, and friendly gatherings of scholars—one such Just was Aristotle.

Theory of the Forms

Plato's philosophical system is Socrates' doctrine of reality. According to Plato, reality exists only in the ideas of things, in the perfect, permanent, unchanging, self-existent entities—the forms. Changing and imperfect objects of perception underlying the latter are only the superficial appearances of things.
Plato interpreted and developed this theory and its ethical use in the identification of virtue with knowledge of absolute reality. What Plato did was to interpret what Socrates would constantly repeat in his conversations: No one sins knowingly.
All of Plato’s writings are in the form of "dialogues," which are critical and argumentative conversations that appear to have occurred between Socrates, friends, and visiting scholars. Socrates himself disliked writing and never wrote a book.
The state is a cardinal concept in Plato's political philosophy. For him, political theory was an essential part of the overall philosophy: knowledge of the perfect life for humans under ideal conditions was a hallmark goal of all philosophical inquiry, and an understanding of such a life could only be achieved through an understanding of the organic relationships that develop among people in the life of a political community—the polis.
Three of the dialogues are devoted primarily to the topic of the state: The Republic, the Statesman, and the Laws.

The Republic is widely regarded as one of the greatest works of all time, discussing in particular the notion of the state and developing it into a philosophical, ethical and social theory. Plato describes what a community should be like for man to fully realize its highest capabilities. So the dialogue is concerned not only with the projection of an ideal state of society, and it is listed among the political 'utopias', but it also relates to criticism of an actual state of society.

The Statesman and the Laws, probably written several decades after the Republic, present ideas that seem to be in some respects sharply contrasted with the theory of the earlier work. But there is no major disagreement. The Statesman deals mainly with the qualities of the true ruler —an all-wise philosopher— and his job: education and character formation. Plato admits that such a perfect statesman is really available, and that in the actual state, there is no guarantee of good rule to store in the supremacy of "the law" embodied in the traditional public habits of the people.
This principle of the necessary subordination of government to law illuminates Plato's distinction between good and bad forms of government. In the Laws, Plato describes the constitutional rules and arrangements for the administration of a real community, which would be as close as possible —if not mirror— to the ideal city set forth in the Republic.
Posted by marciano guerrero at 7:42 AM No comments: