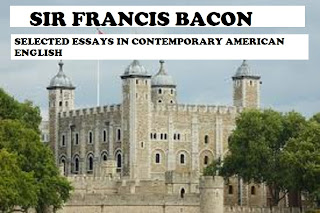 Sir Francis Bacon (1561-1626) was a true man of the British Renaissance, for he became a polymath: philosopher, scientist, essayist and jurist. In addition, his works themselves show that he was a master rhetorician.

Given his manifold and versatile mind, ambition, and practical nature, Lord Bacon is a fine example of the British Renaissance that also produced William Shakespeare.

Born into an aristocratic family —his father was Lord Keeper of the Seal and his uncle Elizabeth's principal minister— he was groomed and bound to become a courtier. At the age of thirteen he set off for Cambridge, where he studied law. Later he was elected to Par­liament and appointed Queen's Counsel (1598).

In 1618, under James he rose to higher appointments until he finally be­came Lord High Chancellor, the loftiest judicial post in England. Knighted in 1603, he assumed the title of Baron Verulam and Viscount St. Albans. Just as his ascendancy had been short of spectacular, his descent was as vertiginous as it was tragic and pathetic. Charged with and having admitted accepting bribes from litigants, he was imprisoned briefly, ban­ished from court, and removed from public office.

After five years of retirement, while experimenting with snow to grasp the process of refrigeration, an acute chill killed him.

Having developed a method of reasoning that required experimentation, he’s deemed to be the father of the inductive method.

Much like the French philosopher and mathematician Rene Descartes, Bacon’s method was to doubt received knowledge. He himself described his method as a "passion for re­search, a power of suspending judgment with patience, of meditating with pleasure, of assenting with caution ... of arranging my thought with scrupulous pains ... and with no blind admiration for antiquity."

In The Advancement of Learning (1605), he explained his wish to redo all the sciences of his own time, and based them not in syllogistic deduction but in experimentation. In the Novum Or­ganum (New Instrument, 1620), he explained the inductive method of reasoning, the method which proceeds from the particular to the general.

Famous is his description of the "idols," his word for bad habits of mind that cause men to fall into error and prevent them from seeing the truth. He hoped to eliminate the super­stitions and quibbling which during the Middle Ages had confused science and philosophy. Much of the education he received at Cambridge he rejected, considering it useless and all but Aristotelian rehashing.

The New Atlantis (unfinished and published in 1627 after his death) is a Utopian sketch (like Sir Thomas More's Utopia) of an ideal country of scholars, where the goal was above all scientific achievement. Bacon’s Essays (1597, 1612, 1625) brought him great fame in world literature. These 58 essays are meditations and maxims contain much wisdom and nimbleness of wit. It is a practical book filled with recipes for living a good (moral) life and achieving success—a self-help book. In Essay XXXIV, Of Riches, he says: “There’s no real use for great riches, unless it is in the distribution.” What appears on the surface to be a simple remark, it contains a profound truth: we can only become wealthy if we think of others. This was true during Bacon’s times as well as our time; to wit: the legacies of Bill Gates and Warren Buffett.

Although his Essays —as all his other books and articles— were written in Latin, one fine translation into English remains dominant today. Yet, the translation includes archaisms: thous, thees, doths, plus intractable syntax and punctuation, causing readers to abandon the book after laboring through two or three pages. A pity, indeed! Imagine going through life ignoring this nugget of wisdom: There is no excellent beauty that has not some strangeness in the proportion. This adage seems to have influence many a writer, to include Edgar Allan Poe, Tolstoy, Ernest Hemingway, and many others.
Our translation renders Bacon’s Essays into contemporary American English, making them easy to grasp, while preserving the author’s style.


The poet Alexander Pope described him as "the wisest, brightest, and meanest of mankind." Bacon’s Essays contain no mean or wicked ideas; his thought is deep and universal, and deserves to be read today.

Posted by marciano guerrero at 3:23 PM