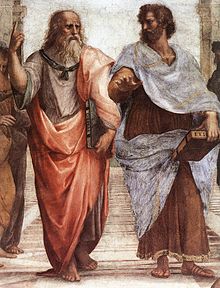 Aristotle was born in Stagira, in Thrace, to a well-connected family, since his father was the personal physician to Amyntas II, king of Macedonia. Aristotle went to Athens in his youth and was a pupil of Plato for about twenty years. After that, he spent several years at the court of Hermias, Prince of Atarneas, inAsia Minor. When Hermias was overthrown, Aristotle fled the country.
Subsequently he was then invited to the court of the Macedonian king Philip, where he became tutor to King Philip’s son Alexander, who later became Alexander the Great.
Shortly after Alexander became king of Macedonian, Aristotle returned to Athens, where he founded a school called the Lyceum. The system of thought he instituted there became known as the "Peripatetic," given the penchant for teachers and students to walk around during their lectures.
Aristotle is often called the father political science, which is justified not only by the vastness of his political writings, but also by the influence of his ideas. His analysis is deep, thorough, and complete, encompassing both Greek philosophy and known history.
In addition, he was an astute observer of competing governments within Greeks and barbarian cities and nations.

All human associations and relations are formed with the aim of achieving some good. The Greek city-state, or polis, is the environment which fosters human relations, by means of its institutions such as families, demes, the agoras, trade associations, private property, and elected government. Aristotle concludes that “man is a political animal,” who can only achieve the good life by living as citizens in an orderly state.
After discussing various theoretical and actual models current at his time, Aristotle attacks Plato’s Republic and Laws, without much success. In addition, he criticizes other contemporary philosophers and the constitutions of Sparta, Crete, and Carthage.

The Nichomachean Ethics is a treatise in ethics; but the end of the book Aristotle declared that the inquiry into ethics necessarily follows into politics.

Aristotle considered rhetorical skills: the ability to compose, give speeches, and make persuasive arguments, one of the most important skills a successful politician could possess. In his famous book The Rhetoric, Aristotle outlines the three basic elements of the rhetorical arts: logos (logic), pathos (emotion), and ethos (truth).

The majority of the other writings of Aristotle has come to us in fragmentary form and disorganized, from which many scholars deduce that the oldest manuscripts may actually be lecture notes taken by students.
Aristotle's writings cover a wide range: logic and metaphysics, mathematics and physics, natural sciences, rhetoric and poetry, ethics and politics. Having achieved a wealth of knowledge, and refined his deductive reasoning method, Aristotle took on his old master, Plato, criticizing his theories, fallacies, and shortcomings.
Aristotle’s prose and style is straight forward, unadorned, and even a bit terse. His observations are often historical and whenever possible based on experience.

‘The philosopher’s influence transcends his own time, with flourishes and rebirths along the centuries. In the 13th century Thomas Aquinas re-energized Aristotle’s political ideas, influencing Christian doctrine, western civilization, and received knowledge in general.
His ideas on fundamental questions of political theory are: the nature, origin and end of the state; the justification of slavery; the definition of citizenship; nature of political power; forms of state, and administrations; the merits of common property and individual property and the issue of limiting the size of the individual property; and how to guarantee political stability.

Posted by marciano guerrero at 5:50 PM