A lively translation of ATALA is now available in KINDLE. 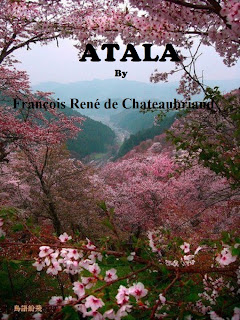 French novelist, essayist, memoirist, translator, playwright, critic and biographer was born in Saint-Malo to a Breton family of aristocratic blood, growing up as the youngest of ten children.
Directionless as a young man, he thought of a naval career; later of priesthood, only to end up in the army, from which he resigned his commission after two years. After witnessing the fall of the Bastille in 1789, he sailed to America in 1791. A year later he returned to France where he served army, again, to defend the monarchy. Wounded and abandoned in the battlefield, against all odds he survived. In 1793 he moved to London to begin a literary career.
In 1801 he published a romantic love story set in America titled Atala to great successful. The following year he wrote Le Génie du christianisme (1802; The Genius of Christianity), receiving great critical acclaim. Fond of traveling, he went to the Near East, Greece, Palestine, and Egypt. He served in different governmental posts while at the same time writing political essays and pamphlets.
In the 1830s, he began work on his Mémoires d'outre‐tombe ; a lifetime project that he continued until his death in 1848.
Chateaubriand’s Claim to Fame
Chateaubriand was a leading literary figure in the French Romanticism movement, and his prolific literary works influenced subsequent generations of younger authors.
Lush lyrical descriptions—particularly of nature as one finds in Atala—together with moral issues fill the inner life of his characters. But that isn’t too surprising since the author himself was not only a romantic, but also a religious apologist and an aesthete.
Major Works
In An Historical, Political, and Moral Essay on Revolutions, Ancient and Modern, Chateaubriand examines classical literature, nature, politics and religion to understand the history of revolution.
In The Genius of Christianity he offers a romantic view of religion, focusing on its “moral and poetic beauties.” This serious treatise is perhaps, intellectually, Chateaubriand’s major contribution to literature, yet today he is better remembered by his short fiction—Atala and René.
Through Atala Chateaubriand contrasts nature and religion through descriptions of the primitive American landscape. Written with a lyrical and unbridled romantic voice, the tale is in the tradition of unrequited love —between Chactas and Atala— that brings to mind the romances of Tristan and Isolde, Romeo and Juliet, Paris and Helen of Troy, Odysseus and Penelope, and Orpheus and Eurydice—among others.
René, centers on the soul-searching of a youth who feels an incestuous love for his sister.

Posted by marciano guerrero at 12:34 PM