Available in NOOK and KINDLE 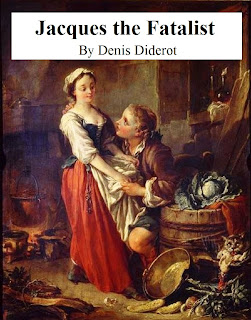 I — Jacques and His Master reach a tough inn

Just how did they meet? By chance, like everyone else. What are their names? What does it matter? Where did they come from? From the nearest place. Where were they going to? Does anyone know where they are going? What did they say? The master said nothing, and Jacques was saying that his captain used to say that everything that happens to us —good and evil— here below was written up above.
MASTER: That is so deep.
JACQUES: The captain added that each shot bullet from a gun had someone’s name on it.
MASTER: And he was right ...
(After a short pause, Jacques exclaimed): To hell with the innkeeper and his inn!
MASTER: Why damn one’s neighbor to the devil?
JACQUES: Because while I was getting drunk with bad wine, I forgot to water our horses. My father saw that and got furious. I nodded my head and he hit me hard with a stick across my shoulders. It happens that a regiment was passing on its way to Camp Fontenoy, so out of spite I enlisted, and we arrived just as the battle started...
MASTER: And you got the bullet with your name on it?
JACQUES: You got it: a shot in the knee. God knows the good and bad adventures that gunshot brought to me. They’re stringed together like the links of a bracelet. If it wasn’t for this shot, for example, I do not think I would have fallen in love with my life, nor had a limp.
MASTER: Have you been in love?
JACQUES: Have I ever!
MASTER: And all on account of that gunshot?
JACQUES: Yes, on account of that.
MASTER: You never said a word of this before.
JACQUES: That’s right.
MASTER: And why not?
JACQUES: That’s something that cannot be said either sooner or later.
MASTER: Are we at the point to learn about these love affairs?
JACQUES: Who knows?
MASTER: In any case, get started ...
Jacques began his love stories. It was past noon: the weather was heavy, and his master fell asleep. Night overtook them in the fields, where they got lost. In a terrible rage the master rained with his horsewhip ferocious lashes on his valet, the poor devil crying out every time: "This one was written up above—to be sure..."
You see, reader, that it is fair to me that to me to have you wait a year, two years, or three years for the story of Jacques’ loves, and by separating him from his master and making each run all the risks that I see fit. What’s to prevent me from marrying the master and his being cuckolded? Or sending Jacques to the islands?  And drive his master there? Or bring them both to France on the same ship? It is easy to make fairy tales! But I will let them both get off with a bad night’s sleep, and you reader: with this delay.

[i] Saint Roch was the patron saint of victims of the plague. He was depicted as having sores or boils.

Posted by marciano guerrero at 5:09 PM