Fadette, a novel by George Sand 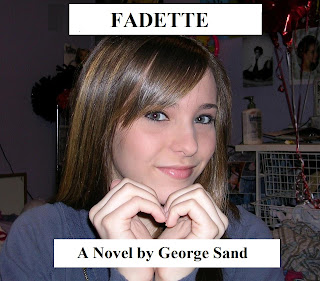 Born Aurore Dupin —George Sand— she was the most famous woman writer in 19th-century France.
Not only was she an amazing writer, but also an all-around fiery woman, who gained fame for both her raucous lifestyle as for her abundant written work.

Her first novel, Indiana, the story of an unhappy wife who struggles to free herself from the imprisonment of marriage was an overnight success. Other novel such as Valentine and Lélia shocked readers with her impassioned call to action to free women from their abused condition.
George Sand had open and notorious —scandalous could be more apt a word— relationships with famous men (artists, writers, musicians) she knew in Paris: Jules Sandeau, Alfred de Musset, Frédéric Chopin, and others.

She was friends with the best of them: Eugène Delacroix, Franz Liszt, and of course, most famously, with Chopin, with whom she had a complicated relationship.

The novel takes place in the French 19th century countryside. The parents of Landry and Sylvinet, identical twins, who are respectable and relatively rich farmers, do not follow the advice that is given at the twins' birth to keep separating and distinguishing them from each other while they are still young. Consequently, the twins grow up together with disastrous emotional consequences

Fadette lives with her younger brother and a grandmother —suspected of being a witch— who makes the two children work constantly. The children are despised and looked down upon by the other villagers for being different: unkempt, covered in dirt, and always wild.

In an idyllic and pastoral French setting, romance flourishes between one of the twins (Landry), and the urchin Fadette, a romance that defies credulity given the insurmountable gulf that the author created between the protagonists. Yet Fadette “steals the show” when the plot and the action turn to her, revealing her as heroine of unimpeachable worth.

In the end not only does she win the best and most eligible boy in the village, but she also enjoys a complete vindication of all suspicions and vilification she had suffered for most of her life. This is a fast-moving veritable bildungsroman  fit not only for young adults for all adult readers who may well learn from the virtues of youngsters.

Posted by marciano guerrero at 9:11 PM