Now available in KINDLE and NOOK. 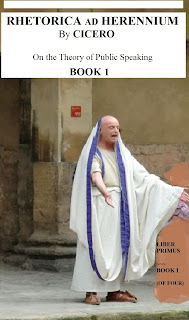 MARCUS TULLIUS CICERO (106--43 B.C.)
Ad Herennium, Book II
Introduction by Marciano Guerrero
Brief Biographical Data
Marcus Tullius Cicero (106 – 43 B.C.) was a Roman philosopher, statesman, lawyer, orator, political theorist, and consul, descendant of a wealthy Roman family, and is widely considered the  greatest Roman orator and prose stylist.
According to Plutarch, Cicero was an outstanding student, endowed with a sharp mind and deep passion for learning. So, it isn’t surprising to see why he would later write: “A mind without instruction can no more bear fruit than can a field, however fertile, without cultivation.” Given his notoriety as a promising student, he earned the distinction to study Roman law under Quintus Mucius Scaevola, founder of the scientific study of Roman law.
Cicero’s Bridge to Immortality
Of all the Roman writers of his time, Cicero was the only one who wrote extensively on political theory. Yet, despite his abundant writings much of it lacks originality.
However, he was the most successful and powerful of all lawyers of his day, as well as a fierce political orator. As a politician he held powerful public offices, engaging in cut-throat party politics; as a result he was exiled several times, and ultimately killed. Indeed, not only was he a thinker, but also a man of action who practiced what he felt, saying: “In men of the highest character and noblest genius there is to be found an insatiable desire for honor, command, power, and glory.”
Under the influence of the Greek Stoics, Cicero worked passionately to include the principles of natural law into the body of Roman juris­prudence, which later became the basis for a political theory of universal social and political truths. Without a doubt, Cicero’s passion for the law and his socio-ethical ideas are a major contribution to the evolution of political theory.
Much like Plato, Cicero had a definite obsession with the forming of a perfect republic, borrowing from Polybius, Plato, and Aristotle the idea that a mixed constitution was the best form for governing states.
About The Authorship and Content of Ad Herennium
Although the Ad Herennium cites Cicero as its author, scholarly research has concluded that the book was written by someone else. Yet, no one has ever attempted to disassociate Cicero’s name from the book.
Book 2 deals with the Conjectural issue (probability, comparison, signs, presumptive proof, subsequent behavior, and confirmatory proof). Under the rubric Judicial issue the Absolute Juridical suit is examined along with the sources of the law (law of nature, statutory, common law, previous judgments, equity, and agreement). Next the Assumptive juridical cause is discussed (comparison, shifting the question of guilt, acknowledgement of the charge, and rejection). At the end the artistic development of an argument is studied (proposition, reason, proof of the reason, embellishment, and resume).
Contrary to the myth that the Ad Herennium is just a book on rhetoric and language, it is a book on the art of public speaking. It is —really— a practical manual for administrators, managers, executives, paralegals, teachers, professors, judges, attorneys in general, litigators in particular—anyone who wishes to write or give a speech. Though humble in its approach, it delivers greatness.
Political Writings
Two political works survive, in part: the Republic (De republica) published in 51 B.C., and the Laws (De legibus) published posthumously.
Other Writings
His writings are in various fields: rhetoric, oratory, ethics and political philosophy. In his theoretical writings he not only exposed the ideas of the classical and Stoic writers of Greece, but also showed how those ideas could be applied in Rome.
Many of his letters and speeches have been published as books. But his legacy remains in Rhetoric and Philosophy.

Posted by marciano guerrero at 2:52 PM