Stendhal's Memoirs of an Egotist 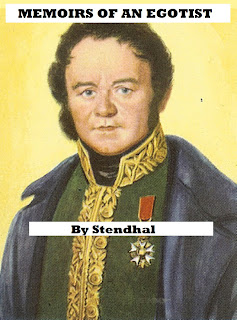 Marie-Henri Beyle (1783-1842), better known by his pen name Stendhal, was a 19th-century French writer. Known for his deep analysis of his characters' psychology, he is considered France’s foremost realist writer as is evident in his novels Le Rouge et le Noir (The Red and the Black, 1830) and La Chartreuse de Parme (The Charterhouse of Parma, 1839).

Stendhal’s prose is always as fresh as an evergreen, puzzling and motivating scholars and even contemporary critics to attempt to find the source of such freshness.

In his Journals (Vol. III: 1928-1939) Andre Gide's has this to say about Stendhal’s prose:
The great secret of Stendhal, his great shrewdness, lay in writing spontaneously. His thought charged with emotion remains as lively, as fresh in color as the newly developed butterfly that the collector has surprised as it was coming out of the cocoon. There we find that element of alertness and spontaneity, of incongruity, of suddenness and nakedness that always delights us anew in his style. It would seem that his thought does not take time to put on its shoes before beginning to run.
In the 20th century, Harvard scholar Matthew Josephson credited Stendhal with anticipating the force of the unconscious mind in human behavior:
He [Stendhal] was aware of the “irrational” or unconscious elements of the mind long before the later nineteenth century psychologists and the men of the Freudian school arrive on the scene.

Caustic and acerbic of just about every one of his acquaintances, Stendhal never pulled any punches. But the bitterest targets of his bluntest commentaries were nations: “in England the divisions between classes are as distinct as they are in India, the country of pariahs,” and “The English are, I think, the most obtuse and barbaric people in the world.” About Germans: “… apart from their enthusiasm, the Germans are too stupid.” And Italians: “The Italians would have held forth, each of them occupying the floor for twenty minutes and remaining the mortal enemy of his antagonist in the discussion. At the third meeting they would have composed satirical sonnets against one another.” About Russia: “In a half-civilized country like Russia he’d pass as a hero…”

The value of Stendhal’s memoirs lies in the man’s sincerity as demonstrated by his plain —often offensive— language. Yet, one has to heed his opinions, for they are laden with deep insights; especially, his opinions about art and literature. His assessment of Walter Scott has been prophetic in a negative way, as has been his recognition of Shakespeare, Diderot, Goldsmith, Voltaire, and Mozart in a positive way.

Besides the lighthearted prose he employed, Stendhal managed to inject humor, oblivious to whether his brand of humor was appropriate or perhaps even risqué. His main preoccupation was to be read, to be quite sober and yet entertaining—never boring.

Posted by marciano guerrero at 7:57 AM