Lucretius' On The Nature of Things - De rerum natura 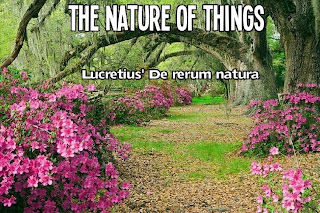 Titus Lucretius Carus (c. 98-55 B.C.) was a Roman poet who wrote De rerum natura (On the Nature of Things). De rerum natura is an epic poem which explains life and the world in incipient atomic principles. In his poem Lucretius adheres to principles as set by philosopher Epicurus.
St. Jerome says that Lucretius committed suicide at the age of 44; furthermore, that Lucretius wrote the work between bouts of madness. None of this has been confirmed. What is clear is his allegiance to Gaius Memmius —an aristocrat married to Fausta, the daughter of the dictator Sulla— to whom he dedicates the work, mentioning him repeatedly throughout the six books.

What is astounding about this epic poem is that it was written more than 2,000 years ago, when the Roman universe was still accounted for by heroes, demigods, and gods—both native and imported.
From the very beginning one feels the athletic language of a poet determined to explain things and creatures in simple language. Although he frequently complains about the “poverty” of Latin to explain the concepts he had in mind, he never gives up in his efforts; at worst his verses reveal a clear-headed poet.

The task he set for himself —to anyone else— would have been too daunting to tackle, yet patiently he attempts to demolish old theories and traditions that had for too long overcome good sense. He deeply believed that matter consisted of minute building blocks he called atoms that their conjunction would spawn things and creatures—including sentient beings. Yet, one tradition —the Aristotelian— was difficult for Lucretius to overthrow, given the tremendous authority that Aristotle’s teaching had garnered over the years. As time and experience has proven, Lucretius eventually won the battle.
De rerum natura miraculously has survived wars, lootings, burnings, and other calamities; and worst of all: censoring. From Machiavelli, Montaigne, Thomas More, to Thomas Jefferson—Lucretius’s poem continues to exert great influence.

This translation (volume I of II) is rendered in prose and in American English for the benefit of readers who find it tedious to read a long poem from beginning to end. The book is a great investment that will pay great intellectual dividends in perpetuity. Volume II will be finished in two to three weeks.

Posted by marciano guerrero at 1:59 PM