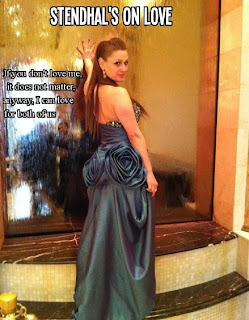 Although Stendhal considered On Love his best creation, not many critics and readers will ever agree with him. Henry James called the book unreadable; others have called it bizarre; and some disconcerting and exasperating.

Here’s a warning by means of a question: what is the 21st century reader to make of this book? In my estimation, with some patience one can find not only an abundance of wit, but also much hidden wisdom about the mysterium tremendum that is human love.

If Stendhal’s On Love is considered a failure, then all I can say is that he is in good company, for Aristophanes, Plato, Denis de Rougemont, Ortega y Gasset, Eric Fromm and others also fell short—and no one can say they disgraced themselves.

Here’s a gem that never fails to give hope to men who search for love: “A requirement of love is that a man's face, at first sight, should show both something to be respected and something to be pitied.”

Posted by marciano guerrero at 11:21 AM