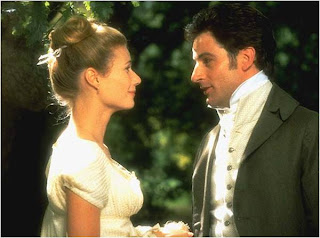 Wordsworth, Coleridge, and Scott. When she died, Byron was famous, and Shelley and Keats had already published. She belongs therefore to the period commonly entitled that of the Romantic Revival, or the Revival of Imagination. And yet these titles do not suit her in the least.

The Waverley Novels  are 'romantic' in this special sense, but hers are not. They might even be called anti-romantic. Nor are they more imagi­native than those of Richardson and Fielding, in the sense implied in the phrase Revival of Imagination.
That other favourite title, again, 'return to nature', seems to leave her equally untouched. She was, indeed, intensely fond of the country; but scenery plays no great part in her novels, and we find scarcely a trace of the distinctively new modes of feeling towards nature. She resembles Cowper here, not Wordsworth or Shelley. If we take 'return to nature' more widely, she still fails to show this return. She does not write of human nature in its most simple, primitive, or unsocial forms. She has no savages or outlaws; the lower orders appear only and casually in a peasant or two, or an hotel waiter; of the few children, most are spoilt; and she is perfectly innocent of the idea that civilization is the fall of man from some paradisal state of nature.

The one contemporary poet to whom she has a marked affinity is Crabbe, but it ceases where Crabbe is most imaginative, as in Sir Eustace Grey, or Prisons, or Peter Grimes. She is separated both by her limitations and by her strength from the greater poets of her time. The strangeness of her position is diminished, no doubt, if we remember that those well-worn titles ignore a large part of the prose literature of her day; but that part was, on the whole, second-rate, and the fact remains that she belongs to the first-rate writers, and is an exception among them. We might even say that she got nothing from the Romantic Revival except the opportunity of mak­ing fun of Mrs. Radcliffe. Essentially, it appears to me, her novels belong to the age of Johnson and Cowper.
There are two distinct strains in Jane Austen. She is a moralist and a humorist.
These strains are often blended or even completely fused, but still they may be distinguished. It is the first that connects her with Johnson, by whom, I suspect, she was a good deal influenced. With an intellect much less massive, she still observes human nature with the same penetration and the same complete honesty. She is like him in the abstention—-no doubt, in her case, much less deliberate—from speculation, and in the orthodoxy and strength of her religion. She is very like him in her contempt for mere sentiment, and for that 'cant' of which Boswell was recommended to clear his mind. We remember Johnson in those passages where she refuses to express a deeper con­cern than she feels for misfortune or grief, and with both there is an occasional touch of brutality in the manner of the refusal. It is a ques­tion, however, of manner alone, and when she speaks her mind fully and gravely she speaks for Johnson too; as when she makes Emma say:

“I hope it may be allowed that, if compassion has produced exertion and relief to the sufferers, it has done all that is truly important. If we feel for the wretched enough to do all we can for them, the rest is empty sympathy, only distressing to ourselves.”

Finally, like Johnson, she is, in the strict sense, a moralist. Her morality, that is to say, is not merely embodied in her plots, it is often openly expressed. She followed a fashion of the day in her abstract titles, Sense and Sensibility, Pride and Prejudice, Persuasion; but the fashion coincides with the move­ment of her mind, and she knew very well the main lesson to be drawn from the other three novels. Her explicit statements and comments are often well worth pondering, though their terminology is sometimes old-fashioned, and though her novels contain infinitely more wisdom than they formulate.

But Jane Austen's favorite attitude, we may even say her instinctive attitude, is, of course, that of the humorist. And this is not all. The foibles, illusions, self-contradictions, of human nature are a joy to her for their own sakes, but also because through action they lead to con­sequences which may be serious but may also be comic. In that case they produce sometimes matter fit for a comedy, a play in which peo­ple's lives fall into an entanglement of errors, misunderstandings, and cross-purposes, from which they are rescued, not by their own wisdom or skill, but by the kindness of Fortune or some Providence with a weakness for lovers.

But the resemblance to comedy goes further: it extends to the whole story. In all her novels, though in varying degrees, Jane Austen regards the characters, good and bad alike, with ironical amusement, because they never see the situation as it really is and as she sees it. This is the deeper source of our unbroken pleasure in reading her. We constantly share her point of view, and are aware of the amusing difference between the fact and its appearance to the actors. If you fail to perceive and enjoy this, you are not really reading Jane Austen. Some readers do not perceive it, and therefore fail to appreciate her. Others perceive it without enjoying it, and they think her cynical. She IS never cynical, and not often merely satirical. A cynic or a mere satirist may be intel­lectually pleased by human absurdities and illusions, but he does not feel them to be good. But to Jane Austen, so far as they are not seriously harmful, they are altogether pleasant, because they are both ridiculous and right.

It is amusing, for example, that Knightley, who is almost a model of good sense, right feeling, and just action, should be unjust to Frank Churchill because, though he does not know it, he himself is in love with Emma: but to Jane Austen that is not only the way a man is made, but the way he should be made. No doubt there are plenty of things that should not be, but when we so regard them they are not comical.

A main point of difference between Jane Austen and Johnson is that to her much of the world is amusing, and much more of it is right. She is less of a moralist and more of a humorist.

Posted by marciano guerrero at 5:26 PM