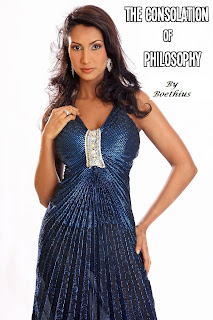 BOOK ONE —The Poet’s sorrows

While I was thus quietly pondering within myself, and writing my sorrowful plaints with my pen, it seemed to me that above my head a woman appeared.
Her face was exceeding venerable, her eyes bright as fire, and of a more than human distinction, her complexion was lively, vigorous, with no trace of enfeeblement. Though her years were rightful, she plainly seemed not of our age and time.
Her height was difficult to judge. At one moment it exceeded not the common height, at another her forehead seemed to strike the sky; and whenever she raised her head higher, she began to pierce within the very heavens, and to baffle the eyes that looked upon her.
Her garments were of an imperishable fabric, wrought with the finest threads and of the most delicate workmanship; and these, as her own lips afterwards assured me, she had herself woven with her own hands.
The beauty of her clothes had been somewhat tarnished by age and neglect, taking on that dingy look which marble contracts from exposure. On the lower­most edge was embroidered the Greek letter II, on the topmost the letter 0[i], and between the two were to be seen steps, like a staircase, from the lower to the upper letter. This robe, moreover, had been torn by the hands of violent persons, who had each snatched away what he could clutch.[ii]
Her right hand held a notebook; in her left she bore a staff. And when she saw the Muses of Poetry standing by my bedside, dic­tating the words of my laments, she was moved to wrath, her eyes flashing sternly.
“Who,” said she, “has allowed you play­acting wenches to approach this sick man—these who, far from giving medicine to heal his malady, feed him with sweet poison? These are what kill the rich crop of reason with the barren thorns of passion, who accustom men’s minds to disease, instead of setting them free. Now, were this man some common man whom your allurements were seducing, as is usually your way, I should be less indignant. On such a man I will not spend my pains. But this is one nurtured in the Eleatic and Academic philosophies. Nay, get going you sirens, whose sweetness lasts not. Leave him for my muses to tend and heal!”
At these words of rebuke, the whole band, in deep sadness, downcast eyes, and blushes that confessed their shame, miserably left the chamber.
Because my sight was dimmed with much weeping, I could not tell who this woman of authority so commanding was. I was dumbfounded. With my gaze fastened on the earth, I silently awaited to see what she might do next.
Drawing near me and sat on the edge of my couch, and, looking into my face all heavy with grief and fixed in sadness on the ground, she scolded me for the disorder of my mind, uttering these words:
[i] Π and Θ are the first letters of the Greek words denoting ‘practical’ and ‘theoretical,’ the two divisions of philosophy.

[ii] Allusion to the Stoic, Epicurean, and other philosophical sects, which Boethius
regards as heterodox

Posted by marciano guerrero at 11:55 AM