Master novelists use a variety of methods of characterization. But the method that Jane Austen used to great advantage was the characters themselves’ speech habits. For example, while Mr. Bennet makes a point of being constantly sarcastic, Mrs. Bennet sounds whiny and shrill throughout. 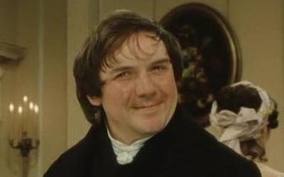 What I want to underscore in this brief article is that we get to know Mr. Collins more by his language than by his acts; although both complement each other.

Our first acquaintance with Mr. Collins comes in the form of a letter, a letter that if the subject matter —the entailment of the Longbourn estate— wasn’t serious enough, it would be comical; perhaps even ridiculous. Immediately, two things are discerned from the letter by Elizabeth Bennet: first, that the man was too deferent to Lady Catherine —obsequious would have been a more apt description— and second, that Mr. Collins was strange: “He must be an oddity, I think,” said she. “I cannot make him out.— There is something very pompous in his style.”

Early in the visit to the Bennets, the narrator tells us that “Mr. Collins was not a sensible man, and the deficiency of nature had been but little assisted by education; the greatest part of his life having been spent under the guidance of an illiterate and miserly father; and though he belonged to one of the universities, he had merely kept the necessary terms, without forming at it any useful acquaintance.” In technical matters, this type of narration is what in the 20th century was labeled as “telling.” Much of fiction in the 20th century followed Henry James and Percy Lubbock’s preference for “show, don’t tell.”

Way ahead of her times, Jane Austen shows —by speech acts— the true nature of characters; in this case, Mr. Collins. In his marriage proposal to Elizabeth, he blurts out a barely coherent explanation for pretending Elizabeth’s hand:
"But the fact is, that being as I am, to inherit this estate after the death of your honored father, (who, however, may live many years longer,) I could not satisfy myself without resolving to chuse a wife from among his daughters, that the loss to them might be as little as possible, when the melancholy event takes place-which, however, as I have already said, may not be for several years."
As we can see, his pretentious speech turns into tortured syntax. Not only is Mr. Collins’ attempting to be polite, delicate, and refined, but he is also unintentionally vulgar, and abrasive, bordering on being offensive. This speech-act corroborates the narrator’s assertion that he was not a sensible man; in other words—a dunce.

Yet the fool is rewarded with the bountifulness of what the Bennet sisters lack: marriage. For in marrying Charlotte Lucas, Mr. Collins finds his vindication and redemption. Erasmus of Rotterdam in his Praise of Folly makes clear that fools rather than wise people achieve happiness. Mr. Collins is a perfect example of that.

Posted by marciano guerrero at 6:29 AM