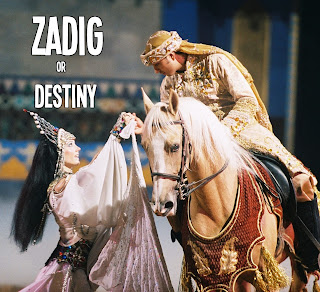 Voltaire (1694 – 1778), originally known as François-Marie Arouet, was born to an upper middle class family, in Paris, France. Orphaned at an early age, he was cared for by his free-thinking godfather.
He attended the Collége Louis-le-Grand, a Jesuit secondary school in Paris, where he received a thorough education in the classics.
In 1715 —at 21-years of age— Voltaire was exiled to Tulle for mocking the regent Orleans. In 1717, he returned to Paris, only to be arrested and exiled to the Bastille for a year for writing alleged libelous poetry. Again, in 1726, he was sent to the Bastille for arguing with the Chevalier de Rohan; after being detained there for two weeks he was shipped off to England, where he would remain for the next three years.
When his Letters on the English Nation (1733) appeared, the book angered the French church and government, forcing Voltaire to flee to Lorraine. He remained there for the next 15 years with his mistress, Emile de Breteuil, at the Château de Cirey, visiting Paris occasionally. By 1778, he enjoyed widespread fame as a literary genius, and he returned to Paris a hero.

Voltaire wrote poetry, plays, historical works, and philosophical works.
The earliest of Voltaire’s best-known plays is the tragedy Oedipus, which was first performed in 1718. Other dramatic tragedies followed, including Mariamne (1724), Zaïre (1732), Mahomet (1736), and Nanine(1739).
Voltaire's body of writing also includes the notable historical works The Age of Louis XIV (1751), and Essay on the Customs and the Spirit of the Nations (1756). This latter work traced the progression of world civilization by focusing on social history and the arts.
Voltaire's popular philosophic works took the form of the short stories Micromégas (1752) and Plato’s Dream (1756), along with his famed satirical novella Candide (1759). In 1764, he published another of his most important philosophical works, Dictionnaire philosophique
An ailing Voltaire bid farewell to his public at a production of his play Irene: “I die adoring God, loving my friends, not hating my enemies, and detesting superstition.”
Two months later he died in his sleep on May 30, 1778, in Paris, France.

About Zadig or Destiny

This story is a philosophical, romantic satire, attacking religious mania, the foibles of people in general, the burdens of being virtuous and happiness. Voltaire uses ancient Babylon as his setting, which provides a great contrast to France of the Enlightenment; Babylonians though scientifically and technologically advanced, had a closed culture ruled by an absolute monarch.
In brief the story chronicles the adventures of Zadig, a benevolent and charismatic figure who reveres the good and the beautiful. Despite incidental amorous detours, Zadig’s love for Queen Astarte glows a paragon of sublime fidelity to woman.
To depict the astuteness and depth of intelligence of the eponymous protagonist, Voltaire contrives passages of logical deduction never found in earlier literature. In one instance, in accounting for the Queen’s lost dog, though he had never seen it, Zadig says:
“She’s a very small spaniel,” added Zadig. “She has recently had a litter, and she limps with her left front paw, and she has very long ears.”
Condemned for lying, in his defense he states:
“I was out walking near the little wood where I met the venerable eunuch and the most illustrious Master of the Hunt. Seeing some animal tracks in the sand, and I could easily tell that they were those of a small dog. Long, shallow grooves drawn across tiny heaps of sand between the paw-marks told me that it was a bitch whose teats were hanging down, which meant that she had had had a litter a few days previously. Other traces going in a different direction, and apparently made by something brushing constantly over the surface of the sand beside the front paws, told me that she had very long ears. And as I noticed that the sand was always less indented by one paw than by the other three, I realized that the bitch belonging to our most august Queen had, if I may dare say so, a slight limp.”
Edgar Allan Poe may have been inspired by Voltaire’s Zadig when he created C. Auguste Dupin in "The Murders in the Rue Morgue," which Poe called a tale of ratiocination and which established the modern detective fiction genre. Arthur Conan Doyle was perhaps also influenced by Zadig. And not without reason, many critics and scholars identify Zadig as the first systematic detective and original source of the genre.

Posted by marciano guerrero at 10:40 AM