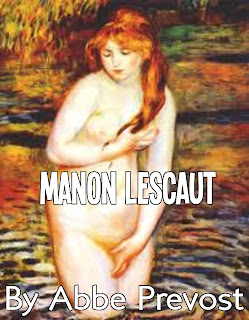 Abbé Prévost (1697 – 1763), was a  French novelist and journalist. After having been ordained as a Benedictine priest, given his rebellious nature, he got in trouble with the ecclesiastical authorities, causing him to flee to England. There he earned a living as a private tutor in wealthy families. Later he moved to Holland, returning to Paris in 1734.

Set in France and Louisiana in the early 18th century, more than a story about Manon, the story is about the blind devotion the hero, the Chevalier des Grieux, developed for his lover—the gorgeous young woman, Manon Lescaut.

Of a noble wealthy family and with a fine education Des Grieux gives it all up when he meets Manon Lescaut. In Paris the young lovers enjoy a life of ups and downs because of financial pressures. While Des Grieux is content with living a simple life, Manon has an obsession with expensive taste and luxury exacerbated by a congenital fear of poverty.

The cavalier continually borrows money from his unwaveringly loyal friend Tiberge, and others, engaging in crooked gambling. Just when he accumulates sufficient capital, fate thwarts his ambitions with theft, a house fire, extortions, and the like. Because Manon cannot be satisfied with the Cavalier’s intermittent income, she leaves him for a richer man. This perennial fear haunts him throughout the story.

The couple’s penchant for clever thievery of rich people gets them in trouble with the law. For their last crime the two lovers are sent to New Orleans in America.

In American soil, they live in idyllic peace—for a while. Des Grieux’s naivete and Manon’s beauty are a recipe for tragedy. Believing he had killed the Governor’s nephew, who had pretended to win Manon, the couple flees New Orleans, venturing into the wilderness of Louisiana, hoping to get help from the native Indians, to reach a distant English settlement.

Given the harsh elements and Manon’s delicate constitution, she dies within twenty four hours of their escape. Captured once again, Des Grieux is tried and pardoned, returning to France to become a cleric.

This framed novel is narrated in the first person (by both narrators), and because both narrators have a sound education their prose is elevated and literary. Even the dialogues contain lyrical tones. Although the genre wasn’t quite yet developed, the techniques used by the author are well advanced of his times. Manon Lescaut (1893), inspired Italian composer Giacomo Puccini to compose the opera by the same name.

All the elements of a thriller —suspense, mystery, narrow escapes, action, intrigue, etc.— are all present, making the prose athletic, robust, taking the reader on a non-stop galloping ride from beginning to end.
Available in amazon.

Posted by marciano guerrero at 10:48 PM