Available in Kindle and Nook. 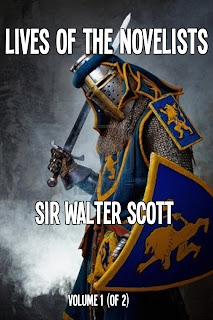 Sir Walter Scott (1771 – 1832) was born on in Edinburgh; his father was an attorney and his mother was the daughter of professor of medicine.
Although physically impaired in the right leg, he grew up to be an imposing vigorous man of over six feet.
He attended Edinburgh High School and studied at Edinburgh University arts and law. Scott was apprenticed to his father in 1786 and in 1792 he was called to the bar.
In 1797 Scott married Margaret Charlotte Charpenter. In time, the couple had five children.
From an early age Scott developed a keen interest in the old Border tales and ballads, devoting much of his time to research and the exploration of the Border country. By 1802 his first major work, Minstrelsy of The Scottish Border appeared.
But it was in poetry where he first achieved recognition; particularly with the publication of “The Lay of The Last Minstrel,” in 1805; the poem was based on an old border country legend. Many other major works were to follow; especially literary novels, and historical romances.
Though he was successful in the cultivation of letters, the letters as a business failed him, leaving him indebted for many years, since he agreed to honor his debts with his writing.
In the 1810s Scott published several novels. From this period date such works as Waverley (1814), dealing with the rebellion of 1745, which attempted to restore a Scottish family to the British throne. Guy Mannering (1815) and Tales Of My Landlord (1816), followed.
Given his great physical stamina, Scott became perhaps one of the most productive and prolific writers of his generation. Not only did he write short stories, novels, poems, plays, and general essays, but he developed a great reputation as a literary critic and historian. To complete his research, he traveled to different European countries.
He died in 1832, and he is buried in Dryburgh Abbey.

About the Lives of the Novelists

Scott was very much interested in writing techniques, in the construction of narratives, but in particular about the scaffolding of novels. So he wrote many essays to include a series which he collected and published as ‘The Novelist’s Library.’ Later, he agreed to give his printer a series of ‘prefaces’ which could be printed in a separate volume as “The Lives of the Novelists.’ In 1827, the Lives were included in Scott’s Miscellaneous Prose Work.
The Lives is comprised of sketches or semblances of fourteen novelists, to include Samuel Johnson, who only wrote one novel. For many readers these semblances contain great historical rather than literary value. The prose is light, yet engaging; gossipy yet seriously informative. Scott himself said that the Lives have no “claim to merit of much research, being taken from the most accessible materials.”
This first volume includes the lives of Fielding, Smollett, Le Sage, Charles Johnstone, Sterne, Goldsmith, and Johnson. In the second volume, now in process, we will include the other seven novelists: Mackenzie, Walpole, Reeve, Richardson, Bage, Cumberland, and Mrs. Radcliffe.

A Legend of Montrose
Guy Mannering
Ivanhoe
Kenilworth
Old Mortality
Peveril of the Peak
Quentin Durward
Redgauntlet
Rob Roy
St. Ronan's Well
The Abbot
The Antiquary - Volume I
The Antiquary - Volume II
The Betrothed
The Black Dwarf
The Bride of Lammermoor
The Chronicles of the Canongate
The Fair Maid of Perth
The Fortunes of Nigel
The Heart of Mid-Lothian
The Monastery
The Surgeon’s Daughter
The Talisman
Woodstock

Letters On Demonology And Witchcraft
The Journal of Sir Walter Scott

Posted by marciano guerrero at 11:44 AM