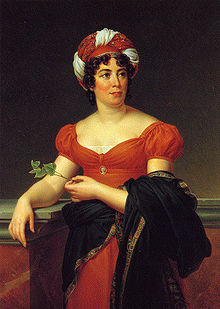 If Madame de Stael had died in 1799, she would be remembered, if remembered at all, as a curious period piece. Her efforts to force the revolutionary deluge into rational and utilitarian channels by means of her pamphlets, her lovers, her drawing-room conspiracies, were consequential enough to bring her to grief, futile enough to be ludicrous.
Her writings, before 1800, despite flashes of brilliance, would not even have earned her a footnote in the history of French literature. To be remembered as a passionate heroine, she lacked in her love affairs an essential tragic dignity, simplicity, and honesty.
But Madame de Stael lived until 1817, and few women left so deep an impression on their time.
As a political figure, as a writer, as a woman, she was to embody a principle. In her lifetime she held a position comparable to Voltaire's fifty years earlier. Ecrasez I'lnfame! was the battle cry with which the Patriarch of Ferney had exhorted his faithful; the Matriarch of Coppet might, with equal justice, have adopted the motto, Resistez I'infame! in defiance of Napoleon's threat, Je Vecraserai—“I shall crush her.”
Later in the century, when liberalism became the established doctrine of the Western world, soon to degenerate into complacency, the significance of Madame de Stael became blurred; in our own times it is possible to see her again in the intense light of her relevancy.
Nothing happened in her personal life in the year 1800 that would explain so sudden a transformation. In truth she was not transformed at all: nothing could change her except, in her last two or three years, physical disintegration. Like a spinning top, she derived her stability from her own inner movement, but every change of direction came from an impulse outside her. To stand still was death; what strength she had she owed to the activity which exhausted others.
But before 1800 her activity had taken place amid constant flux: the top had been spinning on an ever-shifting plane. With each new impulse she had changed direction, opposed what she had helped to create, seemingly animated by the sole desire to undo whatever had been done. Her inner consistency could not become apparent unless the outer setting was stabilized; what she had learned in ten years of turmoil could not take on a consistent shape unless an unyielding outer force imposed consistency on her.
As far as lay in his power, Napoleon Bonaparte did her this favor. It was he who happened to Germaine in 1800. He could not impose consistency on her heart, and her loves continued as turbulent as ever; but he did arrest the Revolution, and he stopped all outlets to ambition save one—to serve him, or his order, on his own terms. Per­haps Germaine was willing enough to serve him, but only on her terms. His uncompromising hostility met her intransigent resistance, and in the fourteen-year duel between the Emperor of Matter and the Em­press of Mind (as Sainte-Beuve called them), the Emperor ended up without any matter, while the Empress had broadened and sharpened her mind.
Her struggle with Napoleon made her the Conscience of Europe; her equally relentless fight to dominate the men she loved made her its spectacle. Two wars of such magnitude conducted simultaneously should have left her little time for anything else; yet this was the period in which she wrote her epoch-making works—On Literature, Corinne, and Germany—besides others scarcely less important or voluminous. These works were her heaviest weapons in both her wars; through them she helped to found a new ideology; because of them she is remembered. The episodes of her wars must form the subject matter of her biography. The preceding chapters have dealt with the personal experiences that shaped and influenced her thought. The following chapters must, perforce, continue the narrative of events. It remains for this chapter to define the essence of Staelian thought and to place it in the framework of the forces that shaped it and of the forces it helped to shape.
Germaine de Stael is invariably presented as the pioneer of Roman­ticism.  Romanticism, in turn, is commonly regarded as a reaction against the Enlightenment.
There is no question that Madame de Stael helped to spread German Romanticism, even if the importance of her role has been exaggerated; but her first visit to Germany took place only in 1803, and in all its essential features her thought was fully developed in 1800, when she published her book On Literature Con­sidered in Its Relationship to Social Institutions. She never departed from any of the fundamental principles she had laid down in that work.
These principles, far from clashing with the philosophy of the Enlightenment, represented its ultimate conclusions and passed them down to later ages as the heritage of liberal idealism. If Romanticism was in conflict with that heritage, then Madame de Stael did not understand Romanticism.
To look on Madame de Stael as a novelist and literary critic is to misunderstand her; she was, above all, a political thinker, a moralist, and a philosopher of history. Every work she wrote wrestles with the same ideas, and these ideas had little to do with literature, unless literature is understood in her own broad definition—"everything con­cerned with the exercise of thought in writing, excepting the physical sciences" (De la litterature, Preliminary Discourse).

[Extracted from J. Christopher Herold, Mistress to an Age: A Life of Madame de Stael, chapter 11]

Posted by marciano guerrero at 11:45 AM