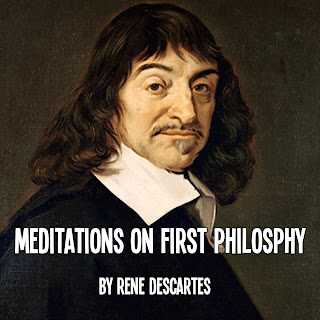 René Descartes (1596 – 1650) was born was born in La Haye, a town in central France. He was extensively educated, first at a boarding school at the Jesuit Henri IV in La Flèche. Later he earned a law degree at age 22, at the University of Poitiers; but he didn’t practice law since an influential teacher persuaded him study and apply mathematics and logic to understanding the natural world. Descartes later added theology and medicine to his studies.
As he writes in his Discourse on Method, having made some stunning discoveries, he felt that at age 22, it was too premature for him to reveal his findings. Instead he traveled, joined the army for a brief time, saw some battles and was introduced to Dutch scientist and philosopher Isaac Beeckman, who would become for Descartes a very influential teacher.

Having gained experience and maturity, Descartes continuously work on developing his new method for finding truthful knowledge. To doubt everything was at the core of his system, rejecting everything that was not clear and distinct to his understanding.
Yet, to doubting everything, someone —a doubter or philosopher— must exist!
By following his method of total doubt, Descartes rejected the Aristotelian and Scholastic traditions that had been the dominant throughout the medieval times. By his new method not only did he prove that he existed, but also the existence of God.
In 1649 Descartes moved to Stockholm to tutor Queen Christina in philosophy. The Queen desired to begin her studies at 5 A.M., and Descartes was unaccustomed to working at this early hour. The work, combined with the harsh climate, had ill effects on Descartes’ health. He died of pneumonia in 1650.

The Meditations is Descartes best effort to prove that there are truths which one simply cannot doubt.
What is ironic is that while he intends to eradicate total skepticism, he uses a method of systematic doubt. Yet, Descartes’ method is quite clever, involving powerful skeptical hypotheses which call into doubt classes of knowledge claims by: the senses, the imagination, and reason or understanding.
Gradually, Descartes attempts to demolish all accepted truths derived from the senses and the imagination, and many of those which come from reason.
Finally, Descartes concludes that he cannot be deceived into thinking that he does not exist when in fact he does, because unless something existed there would be nothing to deceive. This is a fact—one truth which he can know beyond dispute.
To many, Descartes’ effort was extremely arrogant. Yet, it wasn’t out of step with many other philosophers and scientists who perennially have looked for a solid foundation for human knowledge.
The Meditations are repetitive and at times slow going, but not abstruse. With a little effort the main ideas become accessible to everyone—not just philosophers and the learned.

Posted by marciano guerrero at 3:34 AM