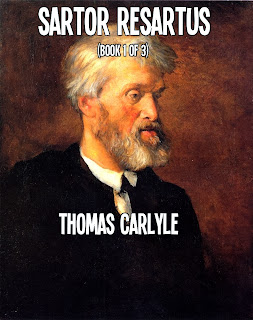 Thomas Carlyle (1757–1832), was born in Scotland. Carlyle was brought up as a strict Calvinist, and was educated at the village school. Later he prepped at an academy before he won a place at the University of Edinburgh.
In 1816 he obtained a position to teach Latin, French, arithmetic, bookkeeping, geometry, navigation and geography. In November 1818, suffering from depression, Carlyle resigned and returned to Edinburgh, where he met a Grace Welsh, a recent widow. With her help—she reviewed and criticized his writing—he developed as a writer. His admiration for Goethe induced him to translate some of Goethe’s masterpieces.
As his reputation grew, Carlyle started to receive commissions from The Edinburgh Review and The Foreign Review.
Thomas and Jane Carlyle moved to London, where he befriended John Stuart Mill and he had several articles published in his Westminster Review. Mill suggested that Carlyle should write a book about the French Revolution. When the book was published, Ralph Waldo Emerson arranged for it to be published in America.

What serious essays don’t accomplish, fiction often does. This is the case of Carlyle’s publication of Sartor Resartus, which established him as a social critic. The work was received with much confusion because of its unique literary style; never mind that not many people really understood the work.
The title of the work means "the tailor re-tailored" and highlights the main theme of the work: that social customs and religious and political institutions are merely the "clothing" of essential realities.
The book is a framed novel, with Carlyle assuming the role of editor, of the theories of the German Professor Diogenes Teufelsdröckh (devil's dung). Such theories the author calls a Philosophy of Clothes. Teufelsdröckh's philosophy holds that just as clothes go out of fashion, the same thing happen to ideas and institutions.  In other words: there’s such a thing as paradigm shifts. Consequently, if one doesn’t change clothes (symbols), the least one can do is to patch them up.
Argentinian writer Jorge Luis Borges in one of lectures says:
He tells the story of an ill-fated love, of a young woman who seems to love him then leaves him, leaving him alone with the night. Then he describes conversations with this imaginary philosopher, and gives long excerpts from a book that never existed called Sartor, the Tailor. And, as he is the one giving excerpts from that imaginary book, he calls the work “The Mended Tailor.”
Carlyle's employs a deliberate literary style that can be exasperating to many readers. The style is obscure, irreverent, odd, eccentric, and often just downright silly. Such literary aberrations offended discerning readers who found the work contained an atheistic vision and other pernicious ideas. Those who defended Carlyle, simply said that his intention was only to be an equal opportunity exposer or all systems, which he viewed as limiting and false.
Our translation eliminates the tedious typography (e.g., excessive capitalization), obscure words, and long paragraphing. In addition, we have included distinctive summaries for each chapter.
This first book (of 3) introduces the philosophy of clothes, while also introducing the philosopher Diogenes Teufelsdröckh, all based on the copious notes provided by the friend of the philosopher, Herr Heuschrecke.  From chapter 8 on, we find that the discussion takes a serious turn when dealing with the world of spirit and pure reason—which is Kant’s language.
The change in tone from playful and sarcastic to serious and deep is what injects a perennial vitality to the work.

Posted by marciano guerrero at 10:15 AM